Asia shares brace for U.S. inflation, euro up on ECB bets By Reuters 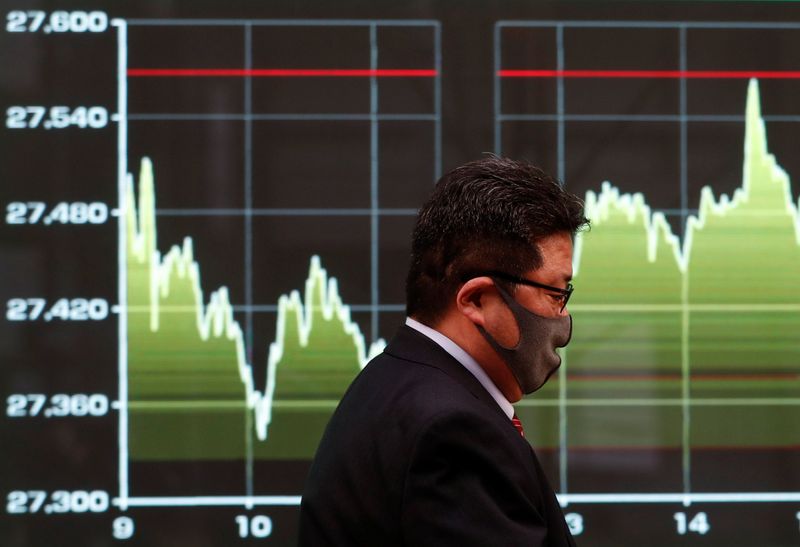 SYDNEY (Reuters) – Asian shares made a muted start on Monday as caution gripped ahead of a critical reading on U.S. inflation, while the euro gained on the yen amid wagers the European Central Bank will take a major step toward policy tightening this week.

Oil prices jumped in early trade after Saudi Arabia raised prices sharply for its crude sales in July, an indicator of how tight supply is even after OPEC+ agreed to accelerate its output increases over the next two months.

MSCI’s broadest index of Asia-Pacific shares outside Japan dipped 0.1%, while eased 0.3%. and Nasdaq futures both edged up 0.1%.

Markets will be on tenterhooks for the U.S. consumer price report on Friday, especially after EU inflation shocked many with a record high last week.

Forecasts are for a steep rise of 0.7% in May, though the annual pace is seen holding at 8.3% while core inflation is seen slowing a little to 5.9%.

A high number would only add to expectations of aggressive tightening by the Federal Reserve with markets already priced for half-point hikes in June and July and almost 200 basis points by the end of the year.

Some analysts thought Friday’s upbeat payrolls report suggested the Fed was on track for a soft landing.

“May’s numbers came in about as good as the Fed could expect,” said Jonathan Millar, an economist at Barclays (LON:).

“It’s a good sign that the Fed’s plans to cool the labour market are playing out favourably so far, with solid gains in employment continuing to generate steady income gains that will help allay recession worries, for the time being.”

The European Central Bank meets on Thursday and President Christine Lagarde is considered certain to confirm an end to bond buying this month and a first rate hike in July, though the jury is out on whether that will be 25 or 50 basis points.

Money markets are priced for 125 bps of hikes by year-end, and 100 bps as soon as October.

“Recent communication by ECB officials have looked to 25bp increases at July and September to exit negative rates by the end of Q3, though with some members preferring to leave the door to larger 50bp hikes open,” said analyst at NAB. “Lagarde’s post-meeting press conference will be closely watched.”

The prospect of rates turning positive this year has helped the euro steady at $1.0722, some way from its recent trough of $1.0348, though it has struggled to clear resistance around $1.0786.

In commodity markets, gold was stuck at $1,852 an ounce having held to a tight range for the past couple of weeks. [GOL/]

Oil prices got an added lift after Saudi Arabia set higher price for shipments to Asia, while investors are wagering supply increases panned by OPEC will not be enough to meet demand especially as China is easing its lockdowns. [O/R]

“Perhaps only a third to half of what OPEC+ has promised will come online over the next two months,” said Vivek Dhar, a mining and energy analyst at CBA.

“While that increase is sorely needed, it falls short of demand growth expectations, especially with EU’s partial ban on Russian oil imports also factored in. We see upside risks to our near term price forecast of $US110/bbl.”

Jun 6, 2022Leave a Comment on Asia shares brace for U.S. inflation, euro up on ECB bets By ReutersBlog, Finance