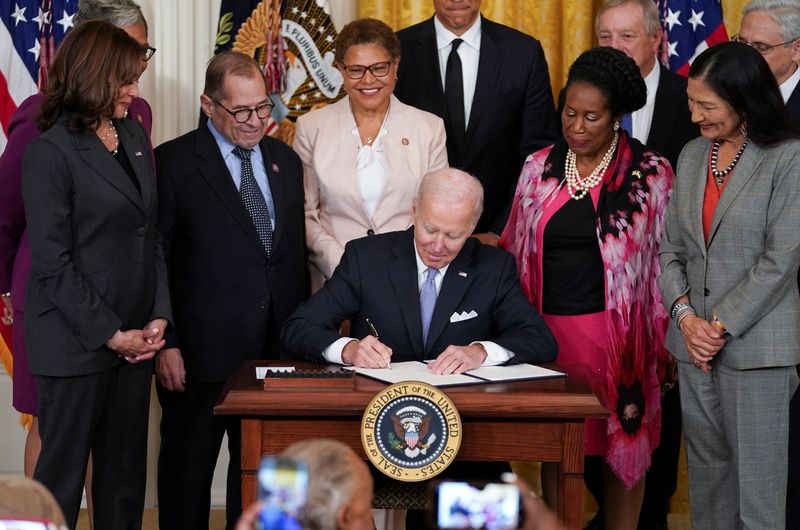 By Andrea Shalal and Jarrett Renshaw

WASHINGTON (Reuters) – U.S. President Joe Biden sought to reform federal and local policing with a broad executive order on Wednesday, the second anniversary of the death of George Floyd, while goading a seemingly immovable Congress to act on police and gun reform.

The order directs all federal agencies to revise their use-of-force policies, creates a national registry of officers fired for misconduct and will use grants to encourage state and local police to restrict the use of chokeholds and neck restraints.

“It’s a measure of what we can do together to heal the very soul of this nation, to address the profound fear trauma, exhaustion particularly Black Americans have experienced for generations,” Biden said.

He had not signed it earlier, he said, because he was hoping Congress would pass a police reform law named after Floyd. The bill collapsed in the U.S. Senate last September under Republican opposition.

Biden spoke the day after a mass shooting at an elementary school in Texas, and he heaped blame on Congress in his opening remarks for their failure to write stronger gun laws.

“Where’s the backbone? Where’s the courage to stand up to a very powerful lobby,” he said, apparently referring to the gun lobby and Republican opposition to tighter gun restrictions.

The White House police order restricts the use of no-knock entries to a limited set of circumstances, such as when an announced entry would pose an imminent threat of physical violence.

“I don’t know any good cop who likes a bad cop,” Biden said.

Floyd, a Black man suspected of passing a counterfeit bill, was killed when Derek Chauvin, a white Minneapolis police officer, knelt on his neck on May 25, 2020, as three other officers looked on. The incident triggered a wave of protests over racial injustice months before Biden was elected.

Chauvin was sentenced to 22-1/2 years in prison last year after his conviction on murder charges.

Biden was joined by members of Floyd’s family, civil rights advocates and law enforcement officials, and Vice President Kamala Harris, who assailing Republicans for the failure to pass the policing bill.

May 26, 2022Leave a Comment on Biden signs police order on second anniversary of George Floyd’s death By ReutersBlog, Finance