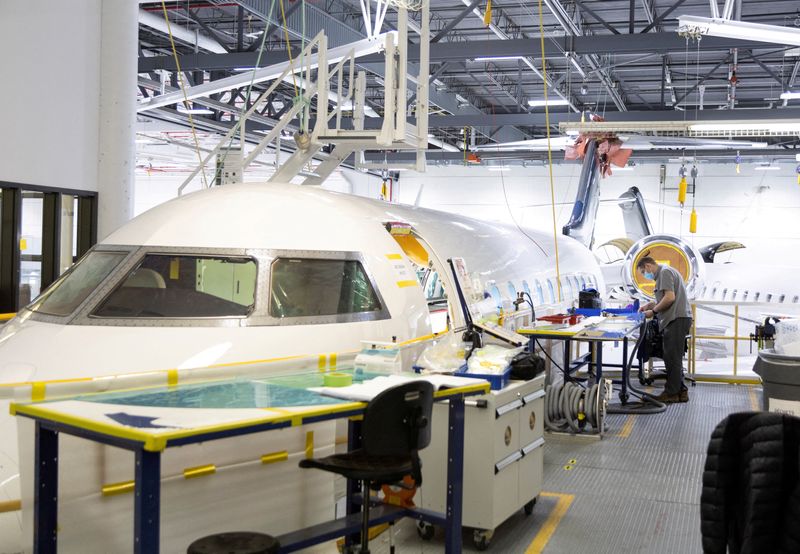 MONTREAL (Reuters) -Bombardier Inc said on Wednesday that workers on a key program for the Canadian business jet maker ratified a new labor contract that will deliver pay hikes of up to 18.5% over five years.

The Montreal-based company is one of several in the aviation and aerospace sectors globally grappling with labor disputes as travel demand rebounds from the COVID-19 pandemic and soaring prices push unions to demand bigger pay rises.

The new contract will cover an estimated 1,800 workers, who mostly produce Bombardier (OTC:)’s popular Challenger business jets, which accounted for a third of the company’s deliveries in 2021.

Companies from Bombardier to some European airlines are seeing wage disputes with workers amid rising inflation, adding to growing pressure on costs and discontent as the summer travel season kicks off.

Inflation in Canada accelerated to 7.7% in May, the highest rate since January 1983.

In the United States, pilots at almost all the major carriers are protesting, demanding higher pay and contract improvements due to “fatiguing” schedules.

Aviation was battered during the COVID pandemic, with 2.3 million jobs lost globally according to some estimates, worsening existing staffing shortages. While workers are coming back, it is giving staff like pilots clout during talks.

“Labor has a lot of power right now and they have inflation in their own lives,” said Richard Aboulafia, managing director at AeroDynamic Advisory. “And in the case of aviation, a lot of them were recently fired or furloughed so they’re not feeling a lot of loyalty.”

Cabin crew from low-cost carrier Ryanair in Spain and Portugal plan to strike on Friday, and work stoppages are expected elsewhere in Europe.

Countries around the world are grappling with high inflation, as hot demand runs up against supply chain constraints and Russia’s invasion of Ukraine drives commodity prices sharply higher.

Aboulafia said aerospace sectors like defense and cargo can more easily pass rising costs on to customers. Airlines are more vulnerable as they risk losing demand as fares rise.

“My big fear in all of this is that you could see kind of a crowding out where defense gets used to paying more and that impacts commercial because they’ll have a harder time matching,” Aboulafia said.

The International Association of Machinists and Aerospace Workers, which reached a deal in April with “historic pay” increases for 5,000 Lockheed Martin Corp (NYSE:) workers in Fort Worth, Texas, has started talks with Boeing (NYSE:) Co’s defense unit.

The union has also been negotiating a new contract for Southwest Airlines (NYSE:) Co’s customer service agents after twice reaching tentative agreement. The last agreement, which was voted down by Southwest workers in May, included a 15% increase in pay over three years and signing bonus.