Prime minister Boris Johnson and cabinet secretary Simon Case are expected to be criticised in a long-awaited report into the partygate scandal by senior civil servant Sue Gray, according to Whitehall officials.

Following the conclusion on Thursday of the Metropolitan police’s investigation into parties in Downing Street and Whitehall in 2020 and 2021 that broke coronavirus rules, Gray is finishing her report into the affair, which was commissioned by Johnson.

The report is due to be published in the middle of next week and Johnson is preparing to make a statement to the House of Commons.

Whitehall officials with knowledge of Gray’s work said a so-called Maxwellisation process was under way, under which about 30 people due to be criticised in her report were being given the opportunity to respond.

These 30 include Johnson and Case, according to officials. Downing Street declined to comment.

Gray’s interim report into partygate, published in January, found there were “failures of leadership and judgment” by Number 10 and the Cabinet Office.

Whitehall officials said her full report was unlikely to force Johnson from office, but it was expected to criticise him.

Much of Gray’s criticism is likely to be directed at civil servants, including Case, added the officials.

They said her conclusions would be “excoriating” about senior civil servants for their behaviour during coronavirus restrictions, including lockdowns.

One official said: “Some of the evidence that Sue has uncovered is unbelievable. The details of some of the parties will raise eyebrows. Email trails also show that many of them were premeditated by civil servants.”

A former cabinet minister added: “I suspect that the Sue Gray report will be more damning for the likes of Simon Case rather than Johnson. It will be very focused on the errors of the civil service.”

One former Whitehall mandarin said there was a “battle royale” between Gray’s team and senior civil servants who might be named in her report about whether they should be identified. “For some, having their name beside a particular party could be career ending,” said the ex-mandarin.

But one Whitehall official said Gray was “not on a crusade to name and shame senior civil servants”. The person acknowledged that some would be identified as “part of a factual narrative of what happened at the various parties”. 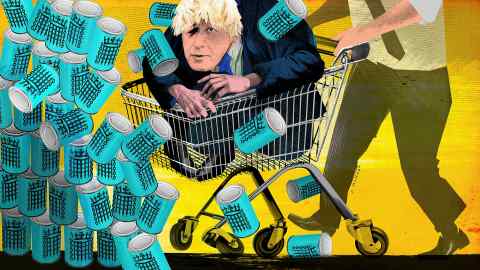 Speaking on a visit to Powys, Johnson said it was “entirely up to Sue Gray” on whether senior officials would be named. “I’ll be looking forward very much to seeing what she has to say and, fingers crossed, that will be pretty soon next week,” he added.

It is unclear how much evidence about the parties in Downing Street and Whitehall in 2020 and 2021 will be contained in Gray’s report.

She has collected more than 300 photos and 500 written documents, and one official briefed on her work said it was most likely that a “handful” of pictures would be published.

The Met’s decision to only fine Johnson for attending a June 2020 birthday party in Downing Street has bought him an immediate reprieve from his critics in the Conservative party, who had hoped to oust him.

One Tory MP said the end of the Met’s investigation represented “a good day for the Boris survival project”, adding there were “huge questions” for the police about how its probe was conducted.

But other Conservatives said Johnson was not out of trouble. “It is not over for Johnson yet,” added one party grandee. “The government is in a bad place, which is compounded by the fact that we have the wrong man leading at the top.”

May 20, 2022Leave a Comment on Boris Johnson and Simon Case braced for criticism in partygate reportBlog, Finance