The crumbling Victorian riverboat pier in Falmouth harbour is ripe for redevelopment, but plans to breathe new life into one of Cornwall’s prettiest coastal towns are on hold.

Mark Williams, the town council clerk, said the pier project would have been a “prime candidate” to receive so-called EU structural funds, of which around £100mn were sent to England’s most southwesterly county each year to boost local infrastructure, business and skills.

But more than a year after the post-Brexit transition arrangements ended, councils such as Falmouth are still waiting for clarity about the new scheme, the UK Shared Prosperity Fund, which will replace the £1.5bn in EU funding that was returned to the UK annually.

The prosperity fund is due to be launched next month. The government promises it will, over time, match the EU funds but be less bureaucratic and better targeted, and be used to “build pride in place and increase life chances” in the UK.

But a detailed prospectus has yet to be published, to the evident frustration of Williams as he gestures down to the pier’s rotting concrete piles.

“Our frustration is that, if we were under the old EU model, we feel pretty confident that we would have ‘spades in the ground’ now on these projects,” he said. “The government keeps promising we won’t lose out from Brexit, and yet we still don’t know what’s going on with this new fund.”

The exasperation in Falmouth is echoed across UK local government as authorities wait to learn how much money they will receive and the rules for how they can spend it.

Whitehall insiders said further information will be revealed around the time of the chancellor’s Spring Statement on March 23, but that “horse-trading” is continuing over the allocation of the new fund, which will be worth £2.6bn during the next three years.

Last month the House of Commons Treasury select committee said this commitment represented a 40 per cent cut to EU spending levels, but Rishi Sunak, chancellor, insisted in a written response to the committee that the government was “exceeding” its commitment to replace EU funding “in full”.

Despite the lower overall figure, the government argued it was meeting its commitment because money from the previous EU settlement was being paid to the UK until 2023, bridging the gap until the prosperity fund hits £1.5bn a year in 2024-25.

However, in northern England significant concerns remain of a funding shortfall after the government appeared to limit its guarantee to match EU funding levels to Cornwall and the devolved administrations of Scotland, Wales and Northern Ireland.

Analysis last month by the Industrial Communities Alliance, a lobby group that campaigns on behalf of former industrial areas, calculated that South Yorkshire, Tees Valley and Durham — including areas once part of Labour’s “Red Wall” that largely both voted for Brexit and swung to the Tories at the last election — were likely to lose out substantially.

Steve Fothergill, economics professor at Sheffield Hallam University who carried out the analysis as the alliance’s national director, said that, based on current EU funding formulas, the region could have been eligible for an extra £900mn a year if the UK had remained in the bloc.

“The government is promising vast amounts of money to Cornwall, but it’s not making anything like that promise to South Yorkshire and the Tees Valley and Durham — and the amounts we’re talking about are really quite staggering,” he said.

Aside from arguments about its size, experts and local government officials said that one of the biggest issues about the prosperity fund was the lack of a smooth transition between the EU scheme and the new programme.

Alex Nice, policy researcher at the Institute for Government think-tank, said the risk of a “funding gap” between the schemes was significant. “It is the delay in getting the new scheme up and running that is really problematic,” he said.

Jayne Kirkham, a Labour councillor in Falmouth, agreed, adding that, even if final amounts paid out under the fund ultimately matched EU financing over the next seven years, her area would have still suffered losses because of the delays.

“I think we’ve already lost out,” she said. “The last lot of EU funding ended in 2020. Some of it is still being paid out now, but we would have had a new funding announcement if we’d stayed in the EU we could have bid for. It was supposed to be seamless.”

Kirkham also raised concerns that the distribution of the funds could be politicised, citing the allocations of previous government “levelling up” funds that appeared to favour Tory-controlled areas.

“You can never prove these things, but the EU funds were allocated on a needs-based formula, but so far, if the others funds are anything to go by, it seems inevitable that the funds will be politicised,” she said.

Cornwall, like much of south-west England, voted for Brexit despite receiving more than €1bn in EU structural funds since 2000, which political leaders concede is an argument for disbursing the fund at a more local level.

However, regional development chiefs in Cornwall also expressed concern that the distribution of the prosperity fund, which will be done via approximately 300 local authorities across the UK rather than at a regional level like the EU scheme, could result in less coherent regional development policy.

Richard Wilcox, chair of the South West Business Improvement Districts, a group seeking to drive local growth, said the new system could set back attempts to achieve regional scale, like the “Great Southwest” campaign, which covered Cornwall, Devon, Somerset and Dorset. “It feels like we’re moving back to a local agenda, moving away from developing those regional aspirations,” he said.

Fothergill, of the ICA, agreed strategic investment needed to be over a wider footprint. “Local economies operate at the subregional level — they are bigger than individual local authorities,” he said.

Steve Houghton, Labour leader of Barnsley council in South Yorkshire, added that the prosperity fund’s three-year cycle was also likely to make it harder for local authorities to plan for the longer term. “We used to have a 10-year programme. We don’t know if we’re going to get that with the SPF,” he said.

The Department for Levelling Up, Housing and Communities disagreed, saying it believed that councils were “best placed to plan and deliver this funding with clear understanding of how to improve the life chances of the communities they serve”. 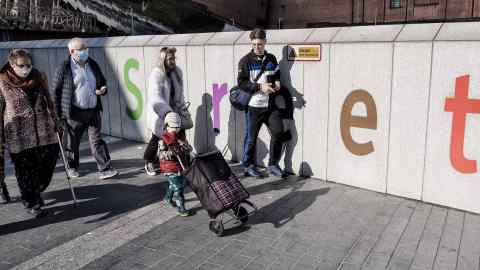 On the positive side, local leaders also expressed hope that the prosperity fund would, as the government promised, be easier to use than the EU system, which was highly centralised and bureaucratic.

At Exeter university’s Penryn campus, a gleaming EU-funded 100-acre facility outside Falmouth, there was trepidation over the fund’s lack of clarity but also optimism that it could be better targeted.

Louise Osborne, the university’s head of innovation, said the timing around the prosperity fund was “tight”, but Dan Bloomfield, project manager at Tevi, an EU-funded scheme to help small businesses, said this “might spur everyone on” to distribute funds more quickly. “We have a chance to do something easier, quicker and cleaner,” he said.