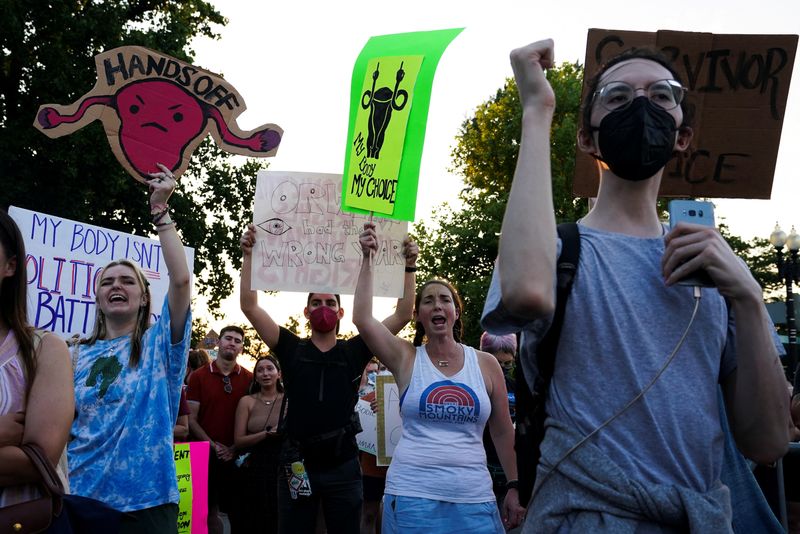 By David Morgan and David Lawder

WASHINGTON (Reuters) – Leading Democratic women called on President Joe Biden and Congress on Sunday to protect abortion rights nationwide after the U.S. Supreme Court overturned Roe v. Wade, in a ruling that has heightened political tensions between the federal government and states.

Two Democratic progressives, Senator Elizabeth Warren and Representative Alexandria Ocasio-Cortez, urged Biden to use federal land as a safe haven for abortion in states that ban or severely restrict the practice, after the high court on Friday overturned the landmark 1973 ruling that had recognized women’s constitutional right to abortion.

“Forcing women to carry pregnancies against their will, will kill them,” Ocasio-Cortez said on NBC’s Meet the Press program.

“We know that the rights to choose should not be divvied up amongst states, and that the sinister practice of taking constitutional rights and allowing each state to decide the quality of your citizenship is wrong,” Abrams told CNN’s State of the Union.

“I would reject the notion that this is the will of the people,” she said in a separate interview on Fox News Sunday.

Democrats also urged Biden to defend women’s access to a pill used for medical abortion, against state efforts to ban its availability, a major new legal fight that his administration indicated it would take on.

Republican South Dakota Governor Kristi Noem said her state, one of 13 conservative states with “trigger” abortion bans now in effect or soon to activate, will stick to its prohibition on mailed abortion pills.

“What the Supreme Court said was that the Constitution does not give a woman the right to have an abortion. That means that at each state they will make the decision how they handle these situations,” Noem told CBS’ Face the Nation. “I love that about this country, that we have a very limited federal government,” she said.

Michigan Governor Gretchen Whitmer, a Democrat who has filed a lawsuit to stop a severe 1931 state abortion ban from being enforced after the fall of Roe v. Wade, called on the Biden administration to take every possible step to preserve reproductive rights.

“I am urging every pro-choice leader to use every tool in their toolbox. So I’m hopeful and I believe that the Biden administration is going to do that,” Whitmer told CBS.

Earlier in June, some 25 Senate Democrats called on Biden to issue an executive order to preserve reproductive rights at the federal level, including making abortion pills more accessible, enabling agencies to provide financial assistance for women to seek abortions in other states and exploring the use of federal lands to provide abortion services in restrictive states.

About 71% of Americans – including majorities of Democrats and Republicans – say decisions about terminating a pregnancy should be left to a woman and her doctor, rather than regulated by the government, according to Reuters/Ipsos polling.

On Friday, Biden and leading Democrats in Congress sought to use the Supreme Court ruling as a rallying cry for the November midterm elections that will determine the balance of power in the Senate and House of Representatives in the run-up to the 2024 presidential election.

Democrats hope that anger among women voters will allow them to expand their razor-thin majority in the Senate, so that they can reform the 60-vote margin required for most legislation.

“This was won through the ballot box by conservatives, and we’re not going to let liberals intimidate the rule of law system to take it away from us,” Graham told Fox News Sunday.