Mehmet Oz, the Donald Trump-backed daytime television star, will fight to become the Republican senator for Pennsylvania this November after winning his party’s primary against the former hedge fund boss David McCormick.

Oz was declared the victor on Friday night after McCormick conceded the race following more than two weeks of wrangling over the result — they were separated by about 1,000 votes.

His victory is a boost for the former president, who backed Oz against the advice of many of his former aides.

It also frees Oz, who made his name as a television doctor on The Oprah Winfrey Show, to fight an election campaign against John Fetterman, the Democratic nominee. Fetterman has not yet returned to campaigning after suffering a stroke just before the primary.*

The result in November could decide the balance of the Senate, which is currently split 50-50 between the two parties, with the vice-president Kamala Harris holding a deciding vote.

Oz said in a statement: “Now that our primary is over, we will make sure that this US Senate seat does not fall into the hands of the radical left, led by John Fetterman.”

Oz and McCormick fought a close and occasionally rancorous race to contest the Senate seat, which has been opened by the retirement of the incumbent Republican Pat Toomey. The two men clashed as they vied for Trump’s backing, and then again over who would stick closest to the former president’s “America First” philosophy.

The race proved expensive for both candidate — each one spent $14mn on their campaigns, according to public disclosures.

Many Republican voters said they were sceptical of Oz’s conservative credentials, despite Trump’s endorsement. Some mentioned his previous statements in support of tighter gun laws and some form of legal abortion as reasons not to vote for him.

McCormick, meanwhile, came in for criticism for his Wall Street background as former chief executive of Bridgewater Associates.

Oz won last month’s vote by a razor-thin margin of just 0.3 per cent, which triggered an automatic recount. 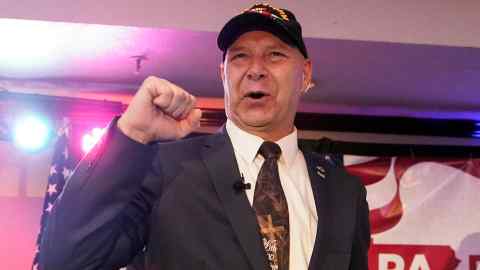 Trump urged Oz to declare himself the victor, while the national Republican party opposed a petition by McCormick for election officials to count mail-in ballots which had not been dated.

Both men hired expensive teams of lawyers, prompting predictions that the race could end up being decided in the courts. But McCormick came under pressure to concede as it became apparent that he was not gaining ground during the recount process.

McCormick’s concession on Friday came four days before the recount finished. He said in a statement: “It’s now clear to me, with the recount largely complete, that we have a nominee.”