ECB has ‘no limits’ in defence of euro from debt turmoil, says executive

ecomHatch > Blog > ECB has ‘no limits’ in defence of euro from debt turmoil, says executive


The European Central Bank has “no limits” in its commitment to defend the euro, board member Isabel Schnabel said on Tuesday, stressing its willingness to launch a new instrument to counter any “disorderly” jump in the borrowing costs of weaker eurozone economies.

The comments by Schnabel in a speech to students of the Panthéon-Sorbonne University in Paris were designed to reassure investors that the ECB is determined to prevent a recent sell-off in the bonds of certain countries from triggering another debt crisis in the region.

Borrowing costs for heavily indebted countries such as Italy and Spain have shot to eight-year highs since the ECB last week signalled an end to its ultra-loose monetary policy of the past decade by announcing plans to stop buying more bonds and to start raising interest rates.

A lack of detail from the ECB over when or how it would intervene to tackle fragmentation in financial markets has worried investors and led to a sell-off in bond markets that hit the debt of more vulnerable southern European countries harder than their northern neighbours.

“Our commitment is stronger than any specific instrument,” said Schnabel, the ECB executive who oversees market operations and is one of the most influential voices on its board. “Our commitment to the euro is our anti-fragmentation tool. This commitment has no limits. And our track record of stepping in when needed backs up this commitment.”

Schnabel indicated the ECB was getting closer to the point where it would intervene in bond markets, saying “some borrowers have seen significantly larger changes in financing conditions than others since the start of the year”.

“Such changes in financing conditions may constitute an impairment in the transmission of monetary policy that requires close monitoring,” she said.

However, she gave little new detail on what the ECB was considering in response. “We will react to new emergencies with existing and potentially new tools,” she said. “These tools might again look different, with different conditions, duration and safeguards to remain firmly within our mandate.”

Frederik Ducrozet, head of macroeconomic research at Pictet Wealth Management, wrote on Twitter that Schnabel had sent a “strong signal” and he guessed “a new ECB backstop is coming”. But Oliver Rakau, an economist at Oxford Economics, wrote on Twitter that a lack of detail in Schnabel’s speech meant “markets won’t care much”.

Even without a new scheme, analysts estimate the ECB already has an additional €200bn to spend on the purchasing of stressed government debt from bringing forward some reinvestments of maturing sovereign assets by up to a year. Schnabel reiterated that such reinvestments “can be adjusted flexibly across time, asset classes and jurisdictions”.

The gap between Italian and German borrowing costs — the so-called spread — has widened to 2.4 percentage points, double last year’s level and up from around 2 percentage points before last week’s ECB meeting.

Further “fragmentation” in member states’ borrowing costs would mark a return to the days before the ECB began buying bonds in 2014 — a time when the threat of a debt crisis in weaker economies risked triggering a break-up of the currency area.

But most ECB governing council members think there is no point announcing a new instrument to tackle this risk until it materialises, because it could be blocked by the ECB’s own lawyers for not being “proportionate” or attract a challenge in Germany’s constitutional court. 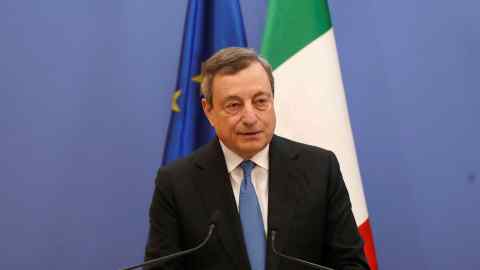 “How we ultimately react to risks of fragmentation will firmly depend on the situation we are facing,” Schnabel said, adding: “This commitment can be put into practice within a very short period of time if we conclude that policy transmission is at risk.”

However, she said the chances of another debt crisis had been reduced by governments extending the maturity of their bonds to lock in low rates.

The public finances of weaker countries have also been boosted by €800bn of grants and cheap loans under the EU’s recovery plan, she said, adding that the ECB expects the impact of high inflation on nominal growth to keep reducing debt as a proportion of gross domestic product for all eurozone countries.

Jun 14, 2022Leave a Comment on ECB has ‘no limits’ in defence of euro from debt turmoil, says executiveBlog, Finance