Brussels has launched legal action against the UK over the Northern Ireland protocol, as relations between the two sides deteriorate over Boris Johnson’s plans to rip up the provision in his 2020 Brexit deal with the EU.

The European Commission announced on Wednesday it would resume a previously paused legal action against the UK for failing to implement full border checks for goods arriving in Northern Ireland from Great Britain.

These were set up by the protocol, the part of the Brexit deal that covers trading arrangements in the region, which is intended to prevent a hard border on the island of Ireland.

The commission’s moves were unveiled by vice-president Maroš Šefčovič after London published legislation this week that would in effect rip up much of the protocol by eliminating some border checks, sidelining the European Court of Justice and giving British ministers powers to override the agreement.

The infringement proceedings could ultimately lead to fines against the UK.

Let’s call a spade a spade: this is illegal. The bill is extremely damaging to mutual trust and respect between EU and UK

“There is no legal, nor political justification whatsoever for unilaterally changing an international agreement,” said Šefčovič. “Let’s call a spade a spade: this is illegal. The UK bill is extremely damaging to mutual trust and respect between EU and UK. It has created deep uncertainty.”

The Biden administration has urged the British prime minister and EU leaders to find a negotiated settlement.

Johnson justifies the legislation on the basis that “urgent” action is needed to stabilise the peace process in Northern Ireland; pro-UK unionists oppose the internal UK trade border on the Irish Sea.

But on Wednesday the British prime minister’s allies admitted they were in no rush to hold a second reading of the Northern Ireland protocol bill — its first House of Commons hurdle — saying only they expected it before the summer break.

Johnson wants to put pressure on the Democratic Unionist Party, the biggest loyalist party, to commit to returning to the frozen NI power sharing executive at Stormont before he holds the second reading.

One minister said it was possible the bill could even remain on hold until the autumn unless the DUP signalled it was ready to return to the executive. “It is up to the DUP to step up,” the minister said.

“We at least need evidence they are on a glide path,” said one government official, who said the legislation was intended to safeguard the 1998 Good Friday Agreement, which created the new political framework.

The DUP has welcomed the legislation but not guaranteed it will rejoin the power-sharing executive with Sinn Féin, the nationalist party which won May’s elections.

DUP leader Sir Jeffrey Donaldson argues he has a mandate to stand firm — a recent Lucid Talk poll for the Belfast Telegraph found 92 per cent of DUP voters and three-quarters of unionist voters overall said the party should only return to the assembly and executive if the protocol is scrapped or significantly altered.

People familiar with the party’s thinking cite distrust of the UK government. “If it hadn’t broken its word so many times to the people in Northern Ireland, then maybe things would be different,” said one.

The UK said the EU’s decision to relaunch the legal case against Britain was disappointing, adding that it would prefer “a negotiated solution” to the dispute over the protocol.

But Šefčovič said the commission had been holding back from launching legal action for the past year “because we were seeking constructive solutions”.

While he added that measures already included in the protocol could smooth trade frictions, the British government said that the EU’s proposals to resolve the dispute “were the same proposals we have been discussing for months” and “in many cases . . . take us backwards from current arrangements”. 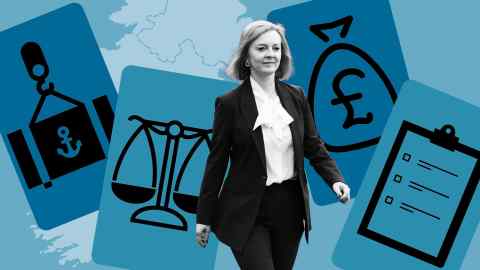 An EU infringement procedure can last several months before a case is referred to the EU’s top court, which can impose fines.

But the EU also has other means of pressure, such as increased checks by national customs authorities on goods coming from Britain.

If Johnson manages to get the legislation enacted into law, the EU could impose tariffs on British goods, or ultimately even end parts of its post-Brexit trade deal.

Johnson is also embroiled in a separate dispute with the European Court of Human Rights — separate to the EU — which on Tuesday issued an injunction to halt a UK deportation of migrants to Rwanda.

The British prime minister has left open the “option” of withdrawing from the European Convention of Human Rights, the treaty the ECHR enforces, and which is embedded in the Good Friday Agreement. Number 10 insisted Johnson was “very alive to the need to protect” the 1998 Belfast agreement.