EU officials are working on a potential centralised procurement deal for smallpox vaccines to be used against rising numbers of monkeypox infections in Europe, according to people familiar with the matter, as nations race to secure orders for the relatively limited number of doses available.

Monkeypox typically causes fever and skin lesions but usually clears up on its own, without treatment. The smallpox vaccine is up to 85 per cent effective in preventing a monkeypox infection, according to the World Health Organization, due to similarities in the pathogens.

Smallpox was eradicated more than four decades ago and vaccine stockpiles have been maintained to hedge against a possible resurgence. Now, global health authorities in Europe and elsewhere are gearing up to use the jab in the contacts of monkeypox cases to stem its spread.

“The (European) Commission is definitely looking at what can be done centrally,” Andrea Ammon, director of the European Centre for Disease Prevention and Control, said in an interview on Tuesday. Central procurement was “one of the options that are looked at but of course countries are also [looking at] exploring what can be done bilaterally”, she added.

The agency had been asked to model how many vaccine doses would be needed, work that was continuing, she said. Ammon, who said the volume of smallpox vaccine available in Europe was not known, would not speculate on the likely volume required but added: “It’s certainly not at the population level as it was for Covid.”

There was no certainty the deal would pan out, the people with knowledge of the discussions noted, though conversations were ongoing, with the potential number of doses to be procured also under consideration.

Danish drugmaker Bavarian Nordic said it had been contacted by the EU about jabs for use across the bloc, but there had been no negotiations. Paul Chaplin, chief executive, said in an interview the company had held at least one meeting with the EU’s Health Emergency Preparedness and Response Authority (HERA).

Chaplin said 1.4mn doses of the vaccine, known as Imvanex in Europe and Jynneos in the US, were available in storage in Denmark.

Monkeypox is endemic in west and central Africa but the WHO has this year reported the largest outbreak outside the continent. As of Tuesday, it had registered 131 cases, mostly in Europe and North America. Another 92 have been classed as probable, with clusters identified across more than a dozen countries.

Bavarian Nordic is the only manufacturer of the vaccine. Chaplin said it would be able to deliver “thousands of doses immediately”.

He said the group was talking to “a lot” of the EU countries and that it was also in discussions with health organisations including the US Centers for Disease Control and Prevention and the WHO. 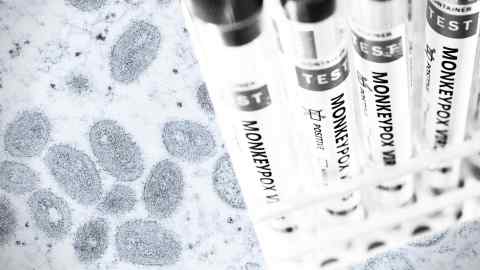 He declined to comment on the specifics of the company’s discussions with governments and on pricing, citing commercial confidentiality. Bavarian Nordic said last week an undisclosed EU country had signed an order. The US has also recently signed a deal with the group. Shares in the company have gained 49 per cent since the first monkeypox case was declared in the UK in early May.

The European Commission on Monday, in response to questions from the Financial Times, said HERA was in close contact with member states, the European Medicines Agency and international experts to ensure access to tools to counter disease outbreaks.

“HERA is on standby to work on procurement and tackle challenges related to the availability and distribution of medical countermeasures and to increase stockpiling capacity to avoid shortages and bottlenecks in deployment,” it added.

The EU adopted a similar approach for the procurement of Covid-19 vaccines. Supporters of that effort have said it enabled less powerful or wealthy countries to have access to the same tools as richer and more powerful ones within the bloc.