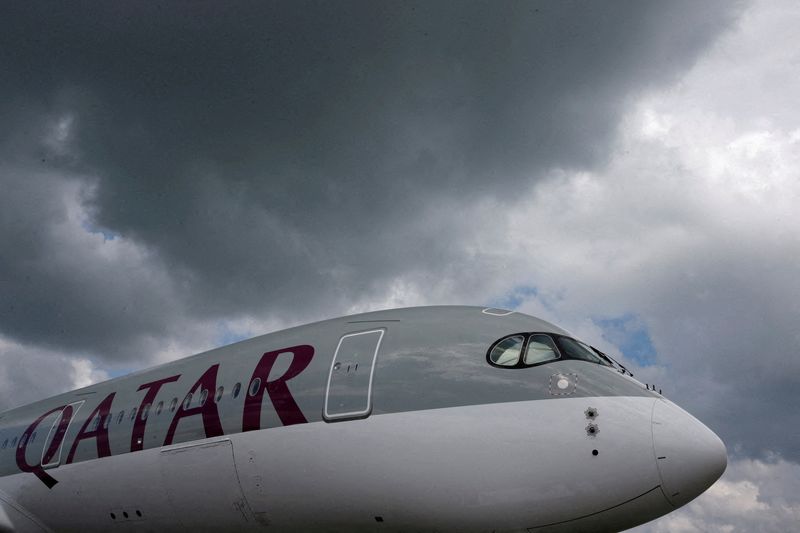 WASHINGTON (Reuters) -Europe’s top aviation safety regulator said on Tuesday he had seen no evidence that paint or surface erosion on A350 jets, which are at the centre of a legal dispute between Airbus and Qatar Airways, represented a safety issue.

The two companies are at loggerheads over the airworthiness of Europe’s newest long-haul jet after damage to its protective outer skin exposed a damaged layer of lightning protection and prompted Qatar to ground more than 20 of the jets.

Airbus, backed by the European Union Aviation Safety Agency (EASA), has acknowledged quality flaws with the jets at several airlines but denies that the problems amount to a safety risk, maintaining that there is ample backup lightning protection.

Qatar Airways, backed by its own national regulator, which has ordered the jets to be taken out of service as the problem appears, insists that the safety impact cannot be properly understood until Airbus provides deeper technical analysis.

In an unprecedented London court battle, it is pursuing Airbus for more than $1 billion in damages, with the value of the carrier’s claim rising by $4 million per day.

On Tuesday, the head of EASA defended the agency’s stance on the A350 when asked during a visit to the United States whether the long-haul aircraft’s safety remained intact.

“We have inspected the airplane. We saw no damage which could imply safety issues,” Patrick Ky, executive director of the European Union Aviation Safety Agency (EASA), told reporters on the sidelines of an air safety conference in Washington.

In a statement two weeks ago, Qatar Airways said it believed “the impact of the condition on safety of the affected aircraft can only be established once (it) has been properly investigated and the full root cause conclusively established”.

Barring a settlement, the two sides are heading towards a potential three-month trial starting in June next year after a British judge called for the matter to be brought to a head as quickly as possible, noting it had industry implications worldwide.

Jun 15, 2022Leave a Comment on Europe regulator sees no safety concern in A350 paint dispute By ReutersBlog, Finance