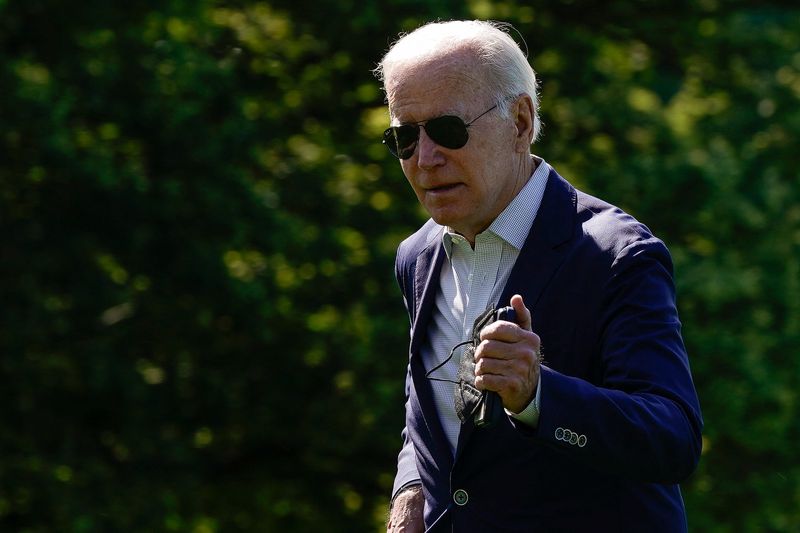 © Reuters. U.S. President Joe Biden walks across the South Lawn after disembarking from Marine One as he returns from Rehoboth Beach, Delaware, with the first lady at the White House in Washington, U.S., June 5, 2022. REUTERS/Elizabeth Frantz

The moves come amid concern about the impact of the Commerce Department’s months-long investigation into whether imports of solar panels from four Southeast Asian nations are circumventing tariffs on goods made in China.

Biden also will invoke the Defense Production Act to drive U.S. manufacturing of solar panels and other clean technologies in the future, with the support of loans and grants, the sources added.

“There is going to be this safe harbor timeout on the … collection of duties, and that’s at the heart of what’s going to save all of these solar projects and ensure that they are going forward,” said one source familiar with the White House’s plans.

State governors, lawmakers, industry officials and environmentalists have expressed concern over the investigation, which could result in retroactive tariffs of up to 250 percent.

It has essentially halted imports from Cambodia, Malaysia, Thailand and Vietnam, which account for more than half of U.S. solar panel supplies and 80 percent of imports.

The investigation has had a chilling effect on the industry, say clean energy groups, some of which have asked Commerce Secretary Gina Raimondo to dismiss it, though she has said she has no discretion to influence it.

The source, who spoke on condition of anonymity, said Biden’s action would bring certainty back to the U.S. solar market and allay companies’ concerns about having to hold billions of dollars in reserves to pay potential tariffs.

The investigation, announced at the end of March, could take 150 days or more to complete.

The issue has created a unique dilemma for the White House, which is eager to show U.S. leadership on climate change, in part by encouraging use of renewable energy, while respecting and keeping its distance from the investigation proceedings.

Using executive action and invoking the DPA, which allows presidents some authority over domestic industries, allows Biden to take advantage of the tools available to him without stepping on the tariff inquiry.

Jun 6, 2022Leave a Comment on Exclusive-Biden to use executive action to spur solar projects hit by probe -sources By ReutersBlog, Finance