Fiji will join the US-led Indo-Pacific Economic Framework just days before China’s foreign minister lands in the country, giving the Biden administration a victory in its competition with Beijing over influence in the Pacific.

Jake Sullivan, US national security adviser, welcomed the move by Fiji to become the first Pacific Island nation and 14th member of IPEF, a trade initiative designed to deepen economic ties, which President Joe Biden launched in Japan on Monday.

“IPEF now reflects the full regional diversity of the Indo-Pacific, with members from north-east and south-east Asia, South Asia, Oceania and the Pacific Islands,” Sullivan said.

The decision provided the US with some relief in its rapidly-escalating battle with Beijing over sway in the Pacific Island nations.

The US, Australia, New Zealand and Japan were alarmed when China signed a security pact with Solomon Islands this year. Some security experts believe the deal could pave the way for Beijing to build a naval base that would allow it to project its power further into the Pacific.

The Financial Times reported last week that China was negotiating a security pact with Kiribati, another Pacific island nation 3,000km from Hawaii. Reuters has reported that Beijing has proposed an even broader security and economic arrangement called the “China-Pacific Island Countries Common Development Vision” to 10 Pacific Island nations.

Chinese foreign secretary Wang Yi was expected to discuss the proposal with Pacific Island nations in Fiji on Monday. But Suva’s decision to join the IPEF has undercut Beijing’s drive to reach a comprehensive political, economic and security deal.

Fiji has been central to China’s push for influence in the Pacific. After Frank Bainimarama, now prime minister, became president through a military coup in 2006, western governments suspended contacts with the country. China stepped in to build ties, offering its backing to Bainimarama’s government and boosting aid from $1mn to $161mn within two years.

Fiji has since helped China promote partnerships with other countries in the region outside the Pacific Island Forum, a grouping that includes US allies Australia and New Zealand.

But analysts said Suva has been much more sophisticated in managing its relationship with China than other small nations in the region.

“They have learned how the Chinese government functions, which agencies do what, and so have acquired capacity to look out for their own interests,” said Tarcisius Kabutaulaka, an associate professor at the University of Hawaii. “For example, they say no to Chinese loans when they think it is not beneficial to them.”

The US push to get Fiji to join IPEF is part of a broader strategy to woo some countries back from China’s sphere of influence. The IPEF is designed to fill part of the vacuum created when then-president Donald Trump withdrew the US from the 12-nation Trans-Pacific Partnership trade deal in 2017. 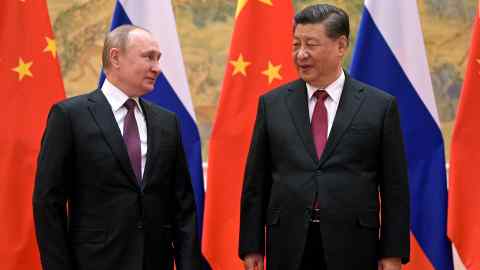 Penny Wong, Australia’s new foreign minister, has also made a clear commitment to the region in an effort to win back support ahead of Wang’s visit.

Speaking to the Pacific Islands Forum in Suva this week, she said Canberra would boost aid to the Pacific by about A$500mn (US$356mn) over the next four years and that it “won’t come with strings attached, nor impose unsustainable financial burdens”.

Sullivan said Fiji would add “vital value” to the IPEF, particularly in efforts to tackle climate change. Fiji and the other Pacific Nations face dire threats from increasing temperatures and rising sea levels.