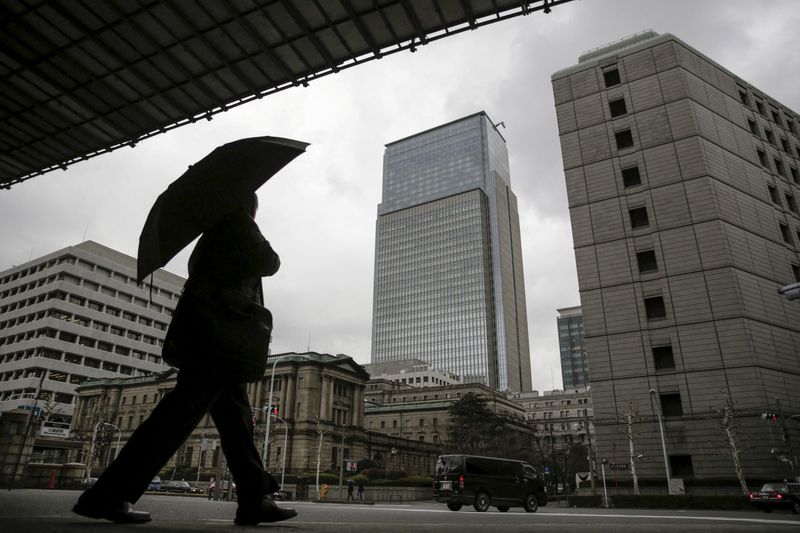 TOKYO (Reuters) -Japan’s net external assets hit a record 411 trillion yen ($3.24 trillion) in 2021, to retain its position as the top creditor for 31 years in a row, the Ministry of Finance (MOF) said on Friday.

A weak yen – it lost about 11% against the dollar last year – boosted the value of foreign assets held by the Japanese government, businesses and individuals.

And that currency factor, together with a rise in direct investment overseas, helped Japan post a record 5.6 billion yen annual increase in the value of net external assets.

The data could ease some concerns about the currency’s recent sharp drop to two-decade lows beyond 131 yen to the dollar, which has raised worries about Japan’s purchasing power.

Japan’s net external assets were 1.3 times than those held by Germany, the world’s No.2 creditor, followed by Hong Kong and China, as of end-2021.

Separate data confirmed Japan’s current account surplus at 15.5 trillion yen in 2021, down 1.2% from a year earlier, with primary income gains worth 20.5 trillion yen adding to a trade surplus of 1.7 trillion yen.

The data underscored the view that Japan’s hefty income gains from its overseas investment more than offsets a weak trade balance, helping keep the yen’s status as a safe-haven currency, for now.

“In the medium to long run, however, the yen won’t be perceived as a safe-haven currency given Japan’s trade deficit and its shrinking population,” Ueno said.