International investors snapping up UK assets have turned their attention to a new part of the London market: the train and bus companies that emerged out of mass privatisations more than 30 years ago.

These companies, including FirstGroup, Go-Ahead and Stagecoach, struggled during the pandemic as their shares were hammered and customer numbers plunged.

But now, even as rail passengers prepare for the biggest strike in a generation, a confluence of factors have created the perfect environment for public transport as the sector benefits from the long-term shift towards net zero emissions and changes in UK regulation.

It is these long-term trends as well as the short-term boost from bargain basement share prices and a weak pound that have attracted a burst of interest from foreign buyers.

David Martin, chair of FirstGroup, said he cannot a recall a time in his 35-year career that the prospects for public transport have been so good.

“There has been lots of words before, lots of talk . . . lots of promises locally that’s never been supported. This time it is for real,” Martin said, referring to government pledges to improve bus networks and reforms on the railways that investors think will benefit private companies.

Alex Paterson, an analyst at Peel Hunt, added: “The story is how attractive public transport is to investors now. You could be looking at a new golden age for public transport.”

Last Monday Go-Ahead, which operates bus and rail services in the UK and several other countries, accepted a £650mn takeover bid from a consortium including Australian bus operator Kinetic Holding and Spain’s Globalvia Inversiones, which is backed by international pension funds.

A second Australian transport company has also indicated it might make a bid for Go-Ahead.

The prospect of a bidding war came just days after FirstGroup, which runs UK rail and bus routes, rejected a £1.2bn bid from I Squared Capital, a private equity group that focuses on global infrastructure investments, an offer it said “significantly undervalues” its future prospects.

In the meantime, bus, coach and tram operator Stagecoach will delist from the London Stock Exchange in the coming days after it agreed to a £595mn cash bid from German asset manager DWS in March, a deal that scuppered a separate takeover offer by rival National Express.

Many believe the push to net zero carbon emissions and for fewer car journeys will encourage travellers to take public transport, particularly buses.

You see more and more contracted business, long term stable contracts, and that’s what infrastructure funds are interested in.

The government has also helped with its £5bn pledge to modernise the creaking bus networks outside London and its introduction of simpler fares and more services.

Some local councils have said the money on offer will amount to far less than this headline figure, but the industry has welcomed it as a step change in government support for buses.

On the railways, where commuter numbers are under threat from the rise of homeworking, the government has ripped up the rail franchising system and introduced longer contracts.

This involves the state paying companies a management fee to run the trains, taking away the revenue risk from the private groups.

These two changes have given them the best of both worlds — exposure to a profitable upside on buses but without the threat of heavy losses on trains.

This has helped attract longer-term investors including infrastructure funds, which appreciate the certainty of the new contracts that the boss of one European transport company described as “bond like” in their appeal.

“They have a long-term investment horizon, they are not like hedge funds who get in and get out, get in, get out, and if you have the right risk approach and you do your processes well, then it is a stable long term business. Not huge margins but stable margins,” he said.

He was speaking in April, before the bid from the Kinetic-Globalvia consortium, which is backed by Canadian pension manager OPTrust, was accepted but after an initial bid was made.

Michael Sewards, co-chief executive of Kinetic, said Go-Ahead had been a “long-held target for us”, adding that the company’s embrace of net zero targets had been a “great attraction”. 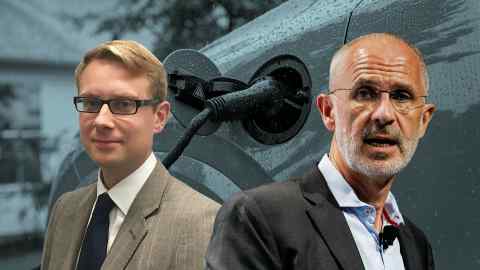 But the dynamics of the market meant the deal came together as a lower share price and the weak pound added to the attraction for the Australian-Spanish consortium.

Although the first bid in January of 975p per share was rejected by Go-Ahead, the two sides eventually agreed on an offer of £15 including a special dividend. This was below the pre-pandemic share price of £21.

Peel Hunt’s Paterson said the weak pound and low share prices were both “definitely” at play in the recent deals across the sector.

“If you are a domestic investor, you are looking at beaten up share prices, and potentially a more positive future. And if you are an international investor, you have weak sterling on top,” he said.