The UN nuclear watchdog’s board of governors voted overwhelmingly on Wednesday in favour of a resolution criticising Iran for failing to co-operate sufficiently over its undeclared atomic sites as tensions mount between the Islamic republic and western powers.

The resolution came amid mounting concerns over Iran’s atomic activity as diplomatic efforts to save the 2015 nuclear accord Tehran signed with world powers flounder.

Hours before the resolution was adopted, Iran said it had removed two cameras belonging to the International Atomic Energy Agency, the UN watchdog, from one of its nuclear facilities. That decision appeared to be a pre-emptive move by Tehran ahead of the vote on the resolution at a board of governors meeting at the IAEA in Vienna.

Iranian officials had warned that a critical resolution would damage diplomatic efforts to save the nuclear accord. The west accuses Tehran of stalling those efforts and of failing to provide the IAEA with relevant information on traces of atomic material found at three of Iran’s nuclear sites.

The resolution, which was passed by 30 of the IAEA’s 35 member states, said the board “expresses profound concern” over uranium traces that were “not clarified by Iran”.

It called “upon Iran to act on an urgent basis to fulfil its legal obligations and, without delay, take up [IAEA director-general Rafael Mariano Grossi’s] offer of further engagement to clarify and resolve all outstanding safeguards issues”.

Russia and China, which are signatories to the nuclear accord, opposed the resolution and three other members abstained.

Iran’s permanent representative to the Vienna-based watchdog, Mohammad Reza Ghaebi, condemned the resolution, adding that Tehran reserved the right to reconsider its “policy and approach” towards the nuclear watchdog.

“Iran will respond to this resolution accordingly and supporters of the resolution would be the ones responsible for the consequences,” he said.

Behrouz Kamalvandi, spokesperson for the Atomic Energy Organisation of Iran, told state television that the Islamic republic “had extensive co-operation with the IAEA but the IAEA’s behaviour was not proportionate to this co-operation”.

“We hope the agency will come to its senses and respond with co-operation with Iran,” he said.

Iran agreed to one of the IAEA’s strictest monitoring programmes after signing the 2015 nuclear accord with the US, Germany, the UK, France, Russia and China. Under the deal, it agreed to curb its nuclear activity in return for the removal of many western sanctions.

But Tehran has been locked in a stand-off with the US since former president Donald Trump unilaterally abandoned the accord in 2018 and imposed waves of crippling sanctions on the republic. Iran responded by aggressively expanding its nuclear activity. 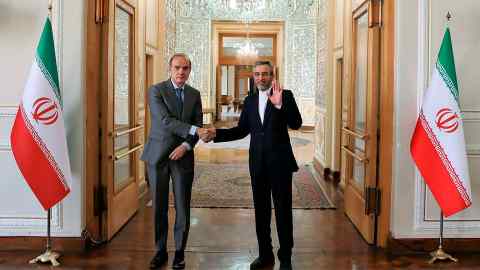 It is now enriching uranium at its highest ever levels and close to weapons grade. It has also been criticised by western officials for becoming less co-operative with the IAEA.

President Joe Biden pledged to rejoin the 2015 accord and remove many sanctions if Iran returned to compliance with the accord. But more than a year of indirect talks between Washington and Tehran, brokered by the EU, have become deadlocked as the two main protagonists have been unable to agree on key outstanding issues.

These include Tehran’s demand that the Biden administration remove the terrorist designation on Iran’s elite Revolutionary Guards.

The west’s diplomatic efforts to save the deal have been complicated by the growing influence of hardliners after Ebrahim Raisi, a conservative cleric and protégé of Ali Khamenei, the supreme leader, won presidential elections last year. Hardliners now control all arms of the state.

Western officials have repeatedly warned that the scale of Iran’s nuclear activity will make talks redundant if a deal is not swiftly reached.

But in recent months, US and European officials have refrained from giving deadlines to Iran to sign up to an agreement with the Biden administration, as they had previously. Analysts say that is a sign that they do not want the diplomatic efforts to collapse as the west responds to Russia’s invasion of Ukraine amid fears the world would be facing two global crises at the same time.