Jacob Zuma manipulated South Africa’s spy agency to cover up alleged corruption by his allies and the Gupta business family, according to the final report of a judicial inquiry into the biggest scandal of the post-apartheid era.

The former president barred South Africa’s state security agency from investigating the Indian-born trio of brothers before they allegedly went on to “capture”, or systematically loot, the state under his presidency, the inquiry said on Thursday.

It added that President Cyril Ramaphosa “should have spoken out” on the Guptas as Zuma’s deputy before he was able to win a battle for control of the ruling African National Congress in 2018.

“He surely had the responsibility to do so,” despite his claims that he resisted graft from within, the inquiry said.

The inquiry has finished reporting back after what its head, chief justice Raymond Zondo, called a “tough four years” of investigation that many South Africans hope will now guide prosecutions, especially after two of the Gupta brothers were arrested in the United Arab Emirates this month.

South Africa is seeking to extradite them on charges of fraud and money laundering. The Guptas, who fled South Africa when Zuma quit power, have always denied wrongdoing, as has the former president. Zuma was jailed briefly last year for defying a summons from the inquiry.

Zuma’s 2011 blocking of a state security agency probe into the family was “if not the fundamental cause of state capture, certainly one of them”, the inquiry said. The spy agency was undermined by a “parallel structure that served the interests of President Zuma rather than the national interest”, it added.

Zondo had already concluded in April that Zuma had paved the way for the Guptas to “help themselves to the money and assets of the people of South Africa” in order to benefit their mining-to-media empire, even replacing the finance minister at their behest. 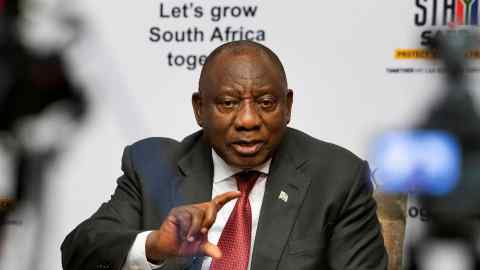 But the inquiry’s latest findings will also raise the temperature of a political battle over Ramaphosa’s promises to uproot corruption. It said that Zuma protected a graft-accused spymaster who went on to parole him from last year’s jail term, and who this month has also implicated Ramaphosa in covering up a home robbery.

Arthur Fraser, the state security agency’s former director-general, accused the president of concealing a robbery at his game farm in 2020.

Ramaphosa has admitted the theft but denied a cover-up and said the claims were “dirty tricks” by those who fear investigation for corruption.

In findings on the spy agency, Zondo said Fraser oversaw a parallel network that siphoned funds and that he should be investigated for criminal prosecution. Fraser has denied wrongdoing and has accused of perjury inquiry witnesses who implicated him.

Zuma stopped an investigation into Fraser and benefited years later when Fraser, as head of South Africa’s prison service under Ramaphosa, paroled him from his jail sentence on medical grounds, the inquiry said.

“The picture emerges that Mr Zuma put a stop to an investigation that could well have led to Mr Fraser’s arrest, prosecution and maybe imprisonment and Mr Fraser put a stop to Mr Zuma’s continued incarceration,” it said.

It was “difficult to understand” why Ramaphosa reappointed Fraser to head the prison service, it added.