Joe Biden has decided to water down his Indo-Pacific Economic Framework in an eleventh-hour move to attract more countries to join the deal that he will unveil in Tokyo on Monday.

Biden is using his first trip to Asia as US president to launch the IPEF, which is intended to respond to criticism from allies and partners that his strategy in the region has been too focused on security and lacked an economic component.

Six people familiar with the situation said the US and other countries had agreed to change the language in the two-page statement that will accompany the unveiling of the IPEF.

An early draft obtained by the Financial Times said the countries would “launch negotiations”. But the Biden administration has since agreed to dilute the language to convey that the countries were starting consultations aimed at later negotiations.

Several people familiar with the talks said Tokyo had urged Washington to be more flexible to maximise the chances of having a deal that would include more south-east Asian nations.

US officials were still negotiating the content of the statement on Thursday as Biden flew on Air Force One to South Korea, the first stop on his five-day, two-country visit to Asia. The White House National Security Council did not respond to a request for comment.

Countries across the Indo-Pacific have spent the past year urging Biden to develop an economic strategy to help counter China, which is rapidly increasing its power and trade presence in the region. Critics have accused Washington of having an “all guns and no butter” strategy, which they said had given China an opportunity to use its economic clout to pressure other countries.

The US started talks with Indo-Pacific countries late last year. But Biden’s team struggled early on to convince many south-east Asian nations and India to join. Several of the people familiar with the discussions said some countries were reluctant because they did not see much value for them, particularly since the IPEF will not include access to the US market.

The IPEF will contain four pillars that will tackle issues such as infrastructure, supply chain resilience and clean energy. It will also include discussions about creating a digital trade agreement, which Tokyo has urged the US to prioritise.

American officials have argued that the IPEF is more suited to the 21st century than traditional trade deals that cut tariffs. They have also made clear that conventional agreements have become politically toxic in US politics, making it difficult to sign deals that grant market access.

Japan and other US allies in Asia remain frustrated that then-president Donald Trump withdrew from the Trans-Pacific Partnership, a 12-nation deal, in 2017. But Hillary Clinton, his Democratic opponent in the 2016 election, had also come out against the TPP due to the souring on trade deals among some voters.

“The trade-off all along with IPEF has been between inclusiveness and participation — a more demanding launch commitment would mean fewer participants, since the US is not offering to discuss new market access,” said Kurt Tong, a partner at consultancy The Asia Group and a former US ambassador responsible for economic issues. 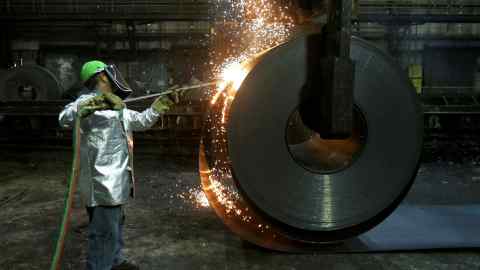 Tong said the IPEF needed to include a critical mass of south-east Asian and emerging economies to be successful. “There will be lots of critics calling the IPEF a glass-half-full, but really the disappointment is not so much about the IPEF, per se, as about the US’s inability to rejoin TPP,” he said.

Ahead of the trip, US national security adviser Jake Sullivan said the framework was a “21st century economic arrangement, a new model designed to tackle new economic challenges”.

One additional challenge for the launch of IPEF is that Australia will hold a general election on Saturday. If a new cabinet is not sworn in by Monday, the government will not have a formal mandate to start “negotiations”.