Boris Johnson has been warned by Tory Eurosceptics that they will vote down his contentious bill to override the Northern Ireland protocol if it is watered down and does not fully “neutralise” the Brexit text.

Liz Truss, UK foreign secretary, agreed to toughen up the bill after last minute representations by the pro-Brexit European Research Group, leading to a fierce cabinet row on Wednesday. The legislation will be published next week.

Johnson, backed by senior cabinet minister Michael Gove, criticised Truss for making the changes, arguing that it would raise tensions with Brussels and make a negotiated settlement with the EU impossible.

The bill to give ministers the power to override the protocol is now being redrafted again, but Tory Eurosceptics fired a warning shot at Johnson, telling him they could vote it down unless it meets their demands.

“We want to neutralise the protocol,” said one senior ERG figure, arguing that the text — part of Johnson’s 2020 Brexit deal with the EU — was causing political instability in the region.

The protocol provides for post-Brexit trading arrangements for Northern Ireland, which remains in the EU’s single market for goods to allow free trade to continue across an open border with the Republic of Ireland.

But pro-UK unionists in Northern Ireland oppose the protocol because it creates a trade border on the Irish Sea for goods travelling east-west from Great Britain.

The Democratic Unionist Party is refusing to rejoin the Northern Ireland executive, with Sinn Féin, the nationalist party, in protest over the protocol.

Bernard Jenkin, one ERG member, told the Commons: “If the government brings forward a bill that does not hold out the serious prospect of the restoration of power sharing in Northern Ireland and the restoration of the Good Friday Agreement, I will vote against it.”

Truss agreed to tweak the bill to accommodate the ERG’s demands that the European Court of Justice should be stripped of any role in Northern Ireland and for “sunset clauses” to strike out key parts of the protocol within four years.

Johnson has ordered Truss to tone down the bill but that raises the nightmare scenario of the legislation being blocked, just a week after 41 per cent of his party’s MPs voted to oust the prime minister. 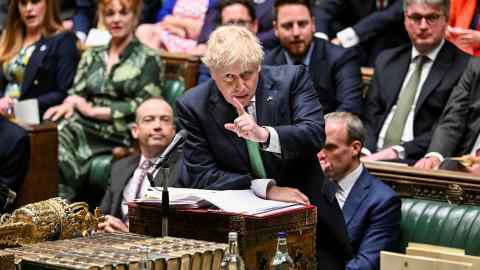 Pro-European Tories, including former prime minister Theresa May, oppose the bill because they believe it could be illegal under international law and will damage Britain’s standing in the world, deepening the rift with the EU.

The idea of them joining forces with Eurosceptic Tory MPs, who may conclude the measure is too weak, reinforces fears among some in the cabinet of a political disaster in the making.

Ministers on Wednesday queried whether the legislation to rip up Johnson’s own international treaty was legal; others fretted that the DUP had not guaranteed it would rejoin the Stormont executive, even if the bill passed.

Sir Keir Starmer, leader of the opposition Labour party, said that with “good faith, statecraft and trust around the negotiating table”, the UK and EU should be able to make technical changes to remove trade friction caused by the protocol.

But he said Johnson did not possess the skills to negotiate a deal and accused him of taking “a wrecking ball” to UK-Ireland relations, which are at a very low ebb.

Simon Coveney, Ireland’s foreign minister, warned that the “EU position has hardened” over the protocol.

“I don’t think there’s a single capital across the EU, or anybody in the European Commission, that believes, at the moment anyway, that the British government is serious about a negotiated solution,” he said.