Liz Cheney: a Republican profile in courage after the Capitol attack

ecomHatch > Blog > Liz Cheney: a Republican profile in courage after the Capitol attack


Regardless of whether the hearings into the January 6 attack on the US Capitol have any impact on public opinion, Liz Cheney’s performance will leave a lasting impression. Almost alone among her colleagues (Adam Kinzinger being the only other Republican lawmaker who agreed to join the committee), the congresswoman has stuck doggedly to the line that what happened that day was an assault on the US republic.

“There will come a day when Donald Trump will be gone,” she said. “But your dishonour will remain.” The same would be true in reverse. Trump could be re-elected to the White House in 2024 with Cheney a spent political force. But her stand will have earned her a place in history.

Unlike most Trump cabinet members and officials who resigned after January 6, Cheney risked a stellar future in politics. She was number three in the House Republican pecking order with high ratings from most of the conservative watchdogs. Partly because of her father, Dick Cheney, the highly controversial former vice-president, her name recognition exceeds that of almost all of her colleagues.

In other words, her stance meets the most important test of courage — personal sacrifice. On January 6, and the days that followed, Cheney was one among many senior Republicans who expressed disgust at what happened.

One by one, they peeled away. Senate minority leader Mitch McConnell described Trump as a “despicable human being” and then voted to acquit him in the Senate. House leader Kevin McCarthy said Trump was finished, then bent over backwards to get back into the former president’s good books. Ted Cruz, the Texas Republican senator, recanted his earlier description of January 6 as an “attempted insurrection” under interrogation from Fox News anchor Tucker Carlson.

Cruz’s climbdown was redolent of dunce-cap-wearing communists during China’s cultural revolution. But it was by no means atypical. Carl Bernstein, the legendary Watergate reporter, published the names of 21 Republican senators who had privately “expressed contempt” for Trump.

“With few exceptions, their craven public silence has helped enable Trump’s most grievous conduct,” he wrote on Twitter. Even Mike Pence, Trump’s vice-president who refused to bend to his will on January 6, looks unlikely to testify. 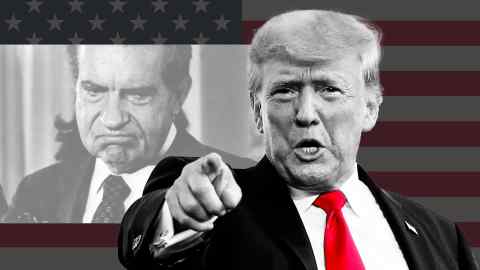 Will Cheney’s lonely stance have any impact on fellow Republicans? The odds do not look strong in the short term. While the hearings were being broadcast on other channels, Fox was running counter programming about the alleged Democratic smear campaign against Trump. Carlson’s show is the beating heart of today’s Republican party. As Carlson showed when he cajoled Cruz into eating his words, he has the ability to intimidate wayward Republicans.

Cheney is a rare exception. She may well lose her Wyoming district in the primary election this August to a Trump-financed rival. But she has hinted that she has set her sights on loftier role models.

No stranger to quoting Winston Churchill, Cheney has implied that she sees Britain’s wartime leader as a better example to follow. During his so-called wilderness years, the prime minister was shunned and mocked by fellow Conservatives for his stubborn opposition to any accommodation with fascist regimes and was widely dismissed as a has-been.

The political moral of that story is that if you are going to jeopardise your career, do it with the courage of your convictions. Whatever fate befalls Cheney, she is in no danger of losing those.

Jun 10, 2022Leave a Comment on Liz Cheney: a Republican profile in courage after the Capitol attackBlog, Finance