Meet the women making mezcal with a truly feminist spirit


In the beginning there was mezcal, an agave-based spirit produced in Mexico for more than 400 years. Primarily made in Oaxaca, this smooth, earthy liquor was the preserve of rural families, who cooked, distilled and bottled it in small-batch facilities across the state. Then came tequila – technically a mezcal, but made strictly from blue agave – which found favour with holidaymakers in the mid-20th century. Businessmen brought bottles back to the US; bartenders added Cointreau and called it a Margarita. The once authentic, homespun spirit became a global phenomenon – with millions of litres (and their profits) exported outside of Mexico.

Mezcal maker Yola Jimenez inherited her farm from her grandfather, an agave enthusiast who started experimenting with different recipes in the late 1960s – “as people in Oaxaca do, it’s like cooking”, she says. Having found success serving it at her bar in Mexico City, in 2015 Jimenez started to bottle the recipe in partnership with her friends singer-songwriter Lykke Li and stylist Gina Correll Aglietti, who round out the team behind Yola Mezcal, one of the few female-owned mezcal businesses in Oaxaca. “We were spending a lot of time together, drinking a lot of mezcal and throwing a lot of dinner parties,” says Correll Aglietti. “One day Lykke was like, ‘Let’s put [Yola’s] name on it.’”

The trio is devoted to supporting Oaxaca and women’s rights in equal measure. Its bottling facility, for instance, is almost entirely run by local women in order to grant financial independence to those already involved in the process. Mezcal is a traditionally matriarchal spirit, with recipes often passed down from mothers to daughters, and many women (including those at Jimenez’s farm) are integral to family mezcalerias. By giving them direct pay, flexible hours and a safe working environment, Jimenez is supporting an industry in one of Mexico’s most impoverished states – and placing women at the heart of it.

More Oaxaca-made bottles to add to the back bar

Mexican-American entrepreneur Sonya Vega Auvray’s love for mezcal was sparked by her friends and family. Determined to create the perfect spirit, she toured 22 farms over two years before settling on a female-run operation in Santiago Matatlán, whose practices have been passed down through five generations. Her Doña Vega mezcal calls for traditional espadín agave, matured for up to nine years to give a peppery sweetness.

Madre Mezcal’s Ensamble uses both espadín and cuishe agave to evoke sweet, mineral flavours with a hint of sage. It’s produced by the Morales family, who have been influential in the San Dionisio region for more than 100 years. Fans can also buy tees, prints and bandanas, with all proceeds from the Together/Juntos range supporting humanitarian-
aid projects.

The Ángeles family has been making mezcal in Santa Catarina Minas since the end of the 19th century. First sold in plastic jugs and recycled bottles, their low-impact spirits are now drunk all over the world, and are widely regarded as some of the finest on the market. Opt for the espadín and largo brew for a hit of green herbs, orange blossom and wet clay. RD

While it’s yet to reach the heights of tequila (so popular that blue agave is now critically overfarmed), traditional mezcal has become a stalwart of city cocktail bars. (In 2019 the industry was worth around $350mn; by 2027, it’s predicted to reach $1.5bn.) But with its success have come inferior iterations. “A lot of the brands being exported and consumed in the US are very smoky,” says Jimenez, adding that the murky flavour is a result of undercooking the agave. “They’re just concerned about trying to make it as quickly as possible.”

Jimenez uses her grandfather’s recipe from 1971, which requires roasting agave in an earth oven for up to eight days, fermenting it for a further 10, then double-distilling it and leaving it to rest for four weeks. Mezcal can be made from about 50 types of agave; Jimenez’s calls for organic espadín and madrecuixe. The result is a bright, complex flavour with notes of citrus and pepper. “The balance is delicious,” affirms Correll Aglietti, who enjoys incorporating the liquor in “more boozy cocktails” such as Negronis and martinis. “It dances really well with other spirits in a way that many mezcals can’t.”

The brand already has a strong line in artistic collaborations. In 2019, it hosted Yola Día, a Los Angeles-based music festival with an all-female line-up – most notably Megan Thee Stallion, Courtney Love and Cat Power – and donated a dollar from every ticket to LA’s Downtown Women’s Center. As part of the festival, Jimenez and curator Su Wu commissioned 26 flags from trans, women-identifying and non-binary artists, later auctioning them to benefit the Immigration Law programme of the American Civil Liberties Union. Working again with Wu, the brand recently sponsored the first exhibition of the late Cuban‑American artist Ana Mendieta’s filmworks in Oaxaca, the place where they were made.

Now Jimenez is launching a limited-edition new Wild Agave Yola Mezcal with bottle artwork by Mexican designer Bárbara Sánchez-Kane. Landing in stores this summer, it’s the first in a series of charitable releases; 50 per cent of proceeds will go to Oaxaca-based education programmes for indigenous women and girls. “Mexico is such a rich place,” says Jimenez, “there’s a great culinary scene, a great art scene and a great feminist movement. We want to make sure that gets showcased.” 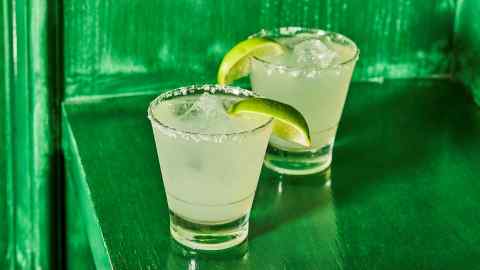 Most of all, the trio like to drink mezcal. “It’s for the best times in life – when you sit down together for a meal, a wedding or a party,” says Li, who recalls a recent gathering in Mexico City to celebrate Jimenez’s engagement. “It was just the most beautiful, incredible night. That’s what I want our brand to be.”

Jun 2, 2022Leave a Comment on Meet the women making mezcal with a truly feminist spiritBlog, Finance