Just 25km of terrain remains before Russia completely encircles a fiercely contested pocket of Ukrainian resistance in the eastern Donbas region, where Moscow has stepped up its offensive over the past month.

For days, punishing artillery strikes have crumbled Ukrainian defences around the city of Sievierodonetsk, the area where “the greatest activity of hostilities is taking place”, according to the Ukrainian army.

If the occupying forces succeed in surrounding the Ukrainian troops there, it would be Russia’s second successful military encirclement — the first came at the port of Mariupol, which fell last week after a three-month siege — and so would have symbolic significance for Moscow. Russia would then control all of Luhansk province, which together with neighbouring Donetsk makes up the Donbas.

But it is also a small area, signalling how Russian ambitions have shrunk since mid-April, when its military shifted focus after fierce Ukrainian resistance forced it to abandon attempts to take Kyiv. Russian-backed separatists already controlled parts of the Donbas before Moscow ordered the full-blown invasion of its neighbour three months ago.

The battle for Sievierodonetsk illustrates the way the fighting is likely to continue over the summer: a grinding war of attrition where the decisive factors will be the size of each force and how well equipped they are, western officials and analysts said.

Serhiy Haidai, Ukraine’s military governor of Luhansk, told local television over the weekend that Russia’s “scorched-earth tactics” sought to “wipe Sievierodonetsk off the face of the earth”. Russian shelling killed four civilians in bomb shelters at the Azot chemical plant on Monday and four more in the city itself, Haidai said.

Russian forces also this week captured the industrial town of Svitlodarsk in the south of Donbas. Serhiy Hoshko, head of Svitlodarsk’s military administration, told Ukrainian website Free Radio that the Russians had raised their country’s flag over the mayor’s office and were conducting patrols to check locals’ documents. Russian-backed separatists claimed they were “purging” the town of “hostile elements”.

“The Russian army is not a spent force yet,” said Samuel Cranny-Evans, a military analyst at the Royal United Services Institute, a London think-tank. “It is still fighting, still making advances and still causing Ukrainian losses.”

Those losses could be significant. Volodymyr Zelensky, Ukraine’s president, has said 50 to 100 of its soldiers may be dying every day. In general, about three times more fighters are wounded than are killed in battle, so Ukraine could be losing about 1,000 soldiers every three days, said Cranny-Evans.

Yet by holding back the Russians instead of retreating, these troops are buying time for the rest of Ukraine’s forces to be supplied with western weaponry, including long-range artillery that would allow them to shell Russian artillery positions behind the front lines.

The US has sent 90 M-777 long-range howitzers to Ukraine but only a dozen have reportedly reached the front and Ukrainian soldiers are still being trained to use the rest. Zelensky has said Russia’s weapons outnumber Ukraine’s by 20 to one.

“By having those forces continue to fight, they are fulfilling an important military function,” a western official said. “Degrading Russian capability . . . and creating time for Ukrainian forces to improve their defences elsewhere.”

Meanwhile, Russian casualty rates appear to have fallen from their high initial levels. According to Ukrainian figures, 23,000 Russian troops were killed in the first two months of the attack, falling to 6,000 in the third month.

That suggests Russian troops are avoiding engaging as directly as before and are largely leaving the attack to artillery barrages, analysts said. The capture of hilly ground around the town of Popsana, for example, has enabled Russian artillery to dominate the area around Sievierodonetsk.

Russia has also deployed 10 so-called BMP-T “Terminator” armoured vehicles, which are mounted with heavy cannon and are designed to provide suppressing fire to help extract soldiers that may be pinned down. 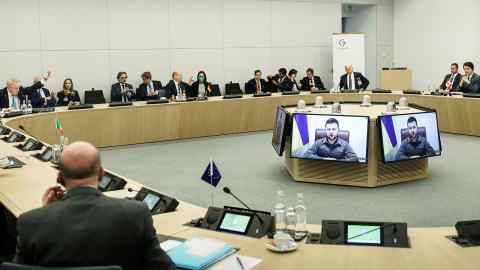 Even so, Russia’s army has its own personnel and equipment problems. According to the Ukrainian army, Moscow has withdrawn old T-62 tanks from storage to re-equip partially destroyed battalions.

It has also had to reconstitute battalion tactical groups, the army’s primary fighting unit, from other partially destroyed BTGs.

This “highlights serious manpower issues and the inability to create . . . formations to exploit gaps made by advancing units”, said Rochan Consulting, a Poland-based military consultancy.

But while Russian forces may struggle to sustain the offensive, analysts say, western and Ukrainian officials warn that Kyiv lacks enough heavy weapons to counter-attack effectively. Until Ukraine’s military is reinforced — on Tuesday Ukraine’s defence minister Oleksii Reznikov said he would soon announce some “unpleasant” surprises for Ukraine’s enemy — the result is likely to be a stalemate.

“Imagine that Russian forces finally take Sievierodonetsk, then what?” said Pavel Luzin, a Russian-based military analyst. “Strategically, it changes little . . . [and] most of the Russian army’s artillery range is less than 25km. So [Russian president Vladimir] Putin can’t destroy all of Ukraine’s cities, everywhere.”

May 25, 2022Leave a Comment on Military briefing: battle for Sievierodonetsk shows Russian strategy in DonbasBlog, Finance