Nato set to bolster defence of Baltics against Russian threat


Nato is to agree an overhaul of its battle plans to offer better protection to the alliance’s eastern flank, tearing up a model that could have meant relinquishing and then attempting to recapture the Baltic states in the event of a Russian invasion.

Jens Stoltenberg, Nato secretary-general, told the Financial Times that the new military blueprint, to be agreed at an annual summit of alliance leaders this week, would drastically upgrade its eastern defences, shifting the focus from deterring any invasion to a full defence of allied territory.

Estonia’s prime minister has claimed that the current doctrine accepted that the Baltic states would be “wiped off the map” in the event of a Russian assault before Nato attempted a counter-attack to liberate them after 180 days.

“We never share the details of operational plans,” Stoltenberg said. “But I can assure you that we have been able to protect countries bordering Russia for decades, adjusting our presence in light of the threat assessment. We have done that before and we will do it again.”

The alliance would “significantly reinforce” its defences in eastern Europe, he said, pledging that Russia would not be able to capture the Estonian capital Tallinn “just as they have not been able to seize the city of Kirkenes in northern Norway or West Berlin during the cold war”.

The new “strategic concept”, to be signed off at the Madrid summit which begins on Tuesday, would define its goals and approaches for the next decade, and agree a vastly expanded plan to defend its easternmost allies in response to Russian president Vladimir Putin’s invasion of Ukraine.

That will include new structures in which western Nato allies, such as the US, UK and France, would pledge their troops, ships and warplanes to be ready to deploy to specific territories on the alliance’s eastern flank, with graded response times starting from the opening hours of any attack.

The new approach, which returns to elements of Nato’s cold war planning for potential Soviet invasion, would allow the alliance’s military commanders to know in advance, at any moment in time, exactly which forces are on standby and how quickly they could enter the battlefield.

Russia would be designated as “the most direct and immediate threat to our security”, Stoltenberg said.

The summit comes as Moscow ramps up the tension with increasing threats against Lithuania over freight shipments to the exclave of Kaliningrad, a flashpoint long identified by Nato as a potential trigger for wider tension in the region.

Stoltenberg said he was wary of speculating whether Russia’s threats were aimed at disrupting the Nato summit or just a coincidence, but the sabre-rattling “reminds us of something we are very much aware of”.

“Whether it happens just before, just after or long after a Nato summit, it doesn’t change the reality,” he said. “We have to be prepared.” 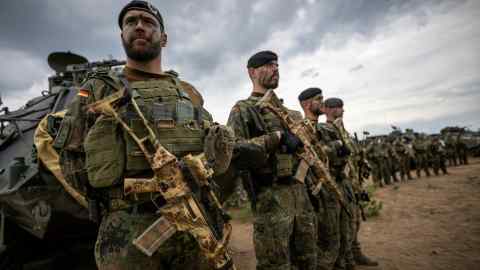 Nato’s existing defence posture in the Baltics involves about 8,000 foreign troops — led by the UK, Canada and Germany — to deter any possible invasion and act as a so-called tripwire in the event of one. Nato officials agree that the approach is now untenable in light of the scale of Putin’s attack on Ukraine.

Stoltenberg said Estonian prime minister Kaja Kallas’s comments regarding the defence of her country “reflect her concerns”, adding that he has discussed “exactly these issues” with her and the leaders of Lithuania and Latvia.

“They’ve been under Soviet rule for decades. They have a history where they have actually learned the hard way what it means to be occupied and invaded,” Stoltenberg said. “I accept [Kallas] wants more Nato presence and I can promise her . . . more presence.”

Stoltenberg continued: “Our main responsibility is to prevent any attack on Estonia or any other ally.

“That’s why we will take huge and important decisions at the summit to further increase our collective defence . . . to defend every inch of Nato territory as we’ve done for 72 years.”

Jun 27, 2022Leave a Comment on Nato set to bolster defence of Baltics against Russian threatBlog, Finance