Orbán levies windfall taxes on business to shore up budget


Hungary’s government has unveiled €5bn of tax rises and spending cuts as it takes its first steps under emergency powers introduced this week in response to an “economic crisis” sparked by war in neighbouring Ukraine.

Prime minister Viktor Orbán’s government said the new powers would allow the government to act swiftly to address a surge in inflation and energy prices and were not a move to undermine parliament.

The windfall taxes, worth €2bn, target the “extra profits” that companies have made from higher energy prices, interest rates and banking fees, as well as more consumer spending in sectors such as telecommunications since the pandemic.

Banks and energy companies will be tapped for the bulk of the extra revenue, with increased taxes also on telecommunications companies, airlines, insurers, retail companies, drug retailers and advertisers.

Márton Nagy, minister for economic strategy, said the measures “only [take] the extraordinary profits — we do not think this should cause elevated prices on the consumer side, there should be no extra inflation nor slowing growth”.

The Budapest stock index BUX fell more than 5 per cent on the news, with energy group MOL dropping 9 per cent, OTP Bank shedding 8 per cent and Magyar Telekom falling 4.5 per cent.

The government will use €1.8bn from the extra tax revenue to keep funding a household energy price cap, which is expected to cost the budget as much as €3bn this year. 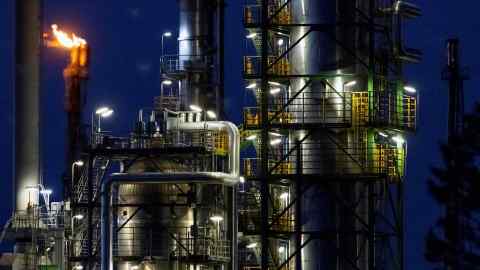 Another €500mn will be earmarked to boost new military procurement, part of the government’s continuing effort to beef up the armed forces in the face of the war in Ukraine.

The measures also contain €3bn worth of spending cuts, mostly in the form of a one-year delay to public investments, which Gergely Gulyás, Orbán’s chief of staff, said should not dent overall economic growth as private investment would continue.

Gulyás said the government’s powers would allow legislation to be accelerated. “We will not turn off parliament controls,” he said.

Orbán used similar emergency powers during the coronavirus pandemic, when critics in Hungary and abroad said they feared an erosion of democratic rights and civil liberties.

Although the government curtailed some freedoms, such as media access to public documents, it largely conducted business as before, using its comfortable majority in parliament. After April’s general election it retained a two-thirds majority to be able to amend the constitution.

“This has a technical significance,” said Ágoston Mráz, director of the Nézőpont Institute, a pro-Orbán think-tank. “Crisis management is a strong suit of the premier and he can communicate this, he can appear to be the strong leader that is needed.”

Orbán has started his fourth consecutive term of office with the country’s finances under strain. Budapest’s dispute with the EU, which accuses Orbán’s government of eroding fundamental rights in the country, has held up the transfer of EU funds, while a €5bn pre-election spending spree also widened the budget deficit.

Gulyás and Nagy said the government would stick to its plans to keep the deficit under 4.9 per cent of gross domestic product this year and 3.5 per cent next year.

May 26, 2022Leave a Comment on Orbán levies windfall taxes on business to shore up budgetBlog, Finance