Kyiv has released a video in which Vladimir Putin’s top ally in Ukraine accuses the country’s former president Petro Poroshenko of serious crimes, a move that suggests political infighting has returned to Kyiv three months into the Russian invasion.

Kyiv’s decision to make his allegations public is the first sign that a long-running feud between Poroshenko and President Volodymyr Zelensky — set aside when Russia invaded in February — has been revived.

The claims partly chime with charges filed last year against Poroshenko, who was president from 2014 to 2019, accusing him of committing treason and financial terrorism by purchasing coal from Moscow-backed separatists in Ukraine’s eastern Donbas border region.

In the video, Medvedchuk, a pro-Russian MP who counts the Russian president as godfather to one of his daughters, also said Poroshenko enlisted his help in buying an oil pipeline from Russia.

Poroshenko has denied the charges and dismissed them as part of a “politically motivated” power struggle with Zelensky.

When asked in an interview with the Financial Times this month if he blamed Zelensky for not preparing Ukraine’s army sufficiently for war, Poroshenko said for the sake of national unity he would not criticise his successor.

“The unity of the country is a key asset we have, and this is how we surprise Putin. [ . . . ] I hate this idea! To attack Zelensky now,” Poroshenko said.

But he added: “Immediately when we finish the war, I am absolutely open to this.”

Igor Golovan, Poroshenko’s lawyer, told local media the Medvedchuk claims were “PR” and had “nothing to do with truth or the law”.

Poroshenko’s political party on Monday said Medvedchuk was trying to “save his own skin from responsibility for his anti-Ukrainian activities”. Medvedchuk was ready to “state” anything about anyone,” it said, adding that pursuing the case during the war was “harmful”.

The video was Medvedchuk’s first appearance since Ukrainian forces arrested him in mid-April during what they said was an attempt to escape the country while under house arrest on treason charges. 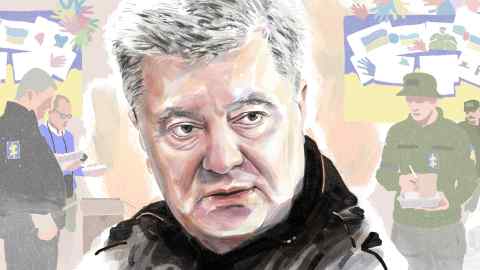 Shortly after his arrest, Ukraine’s security services released a video in which Medvedchuk asked to be swapped for Russian forces and civilians still trapped in the key south-eastern Ukrainian port city of Mariupol, where about 120,000 people were under siege from Russian forces.

The suggestion met a tepid reception in Russia, which has since made little discernible effort to rescue Medvedchuk.

Leonid Slutsky, a senior Russian MP and negotiator in peace talks with Ukraine, said on Saturday that “people in Moscow who have the authority” would consider exchanging Medvedchuk for Ukrainian fighters who surrendered last week after a stand-off at the Azovstal steel plant in Mariupol.

But Dmitry Peskov, Putin’s spokesman, cast doubt on the idea on Monday, telling reporters: “Medvedchuk is a citizen of Ukraine; he has nothing to do with Russia, and he is not a soldier,” according to Interfax.

“These are soldiers and members of nationalist groups, so they are totally different categories of people [to Medvedchuk] and one can hardly speak of any exchanges,” said Peskov.

The fate of the Azovstal fighters, ordered to surrender as part of what Ukraine calls a “rescue operation”, remains equally unclear, with officials offering mixed messages.

The head of a Russian-backed separatist group said on Monday that the Azovstal captives would be put before a military tribunal where they could face the death penalty.

Almost immediately afterwards, a senior Russian foreign ministry official said they could be exchanged for Russian prisoners of war.