It was when sales of discounted kitty litter started picking up that Matthew Farrell knew that something new was happening with US consumer spending.

For more than a year the chief executive of Church & Dwight had seen sales of premium brands like Arm & Hammer Platinum Clump & Seal outpace its lower-priced offerings. In its latest quarter, though, that changed. In cat litter, water flossers and laundry detergent, shoppers began favouring the company’s cheaper options.

“That was a canary in a coal mine,” Farrell told analysts this month. “We would expect that to worsen.”

With inflation at 40-year highs, petrol averaging above $5 a gallon and recession fears weighing on consumer sentiment, Church & Dwight is not alone. In earnings calls and investor conferences in recent weeks, several US retailers have flagged that customers have begun migrating to cheaper products. Others are bracing for more to do so in the coming months.

“Customers are aggressively starting to buy our brands,” Kroger, the $33bn grocery chain, told analysts last week. Like-for-like sales of its store brands were up 6.3 per cent in the latest quarter compared with total growth excluding fuel sales of 4.1 per cent.

The trend is feeding market concerns about the sector, which is exposed to rising prices, excess inventory and unreliable supply chains, but analysts also expect it to create some winners.

Discount retailers and makers of stores’ own brands, in particular, stand to benefit if more consumers switch to cheaper alternatives and private label products.

About 15 per cent of US adults said they had bought lower priced alternatives when shopping for groceries in May, up more than three percentage points from April, according to survey data from Morning Consult. Roughly one in five people buying a car, a computer or a cell phone traded down — up 6-7 percentage points month on month.

Mentions of “trade down” and “trading down” on US retail and consumer companies’ analyst calls and investor presentations are now running above the previous peak they hit in the global financial crisis of 2009, according to data provider Sentieo.

And while some chains that say they have yet to see signs of significant substitution, retailers including Walmart report that they have seen shoppers buying a half-gallon of milk instead of a gallon, or choosing private label lunch meats and bacon over branded versions.

Steven Oakland, CEO of TreeHouse Foods, last month credited the new value-seeking mood among consumers with delivering an expectation-beating quarter for his private label producer, which supplies foods ranging from pita chips to pickles to retailers.

Private label goods have gained unit share in each of the past three months, according to data from market research firm IRI. Retailers as large as Best Buy, Costco, and Dick’s Sporting Goods have all highlighted the acceleration.

Some have detailed how stark the change has been, with SpartanNash, a Michigan-based grocery chain, reporting a near-14 per cent year-over-year increase in the first quarter. Big Lots, the household goods and grocery retailer, said that its private label products had reached almost 30 per cent of its total sales for the period, up “notably from the mid-20s” a year earlier.

Past cycles have shown that “when disposable income becomes tighter, consumers find ways to stretch their budgets,” observed Jack Kleinhenz, chief economist at the National Retail Federation, a trade organisation. 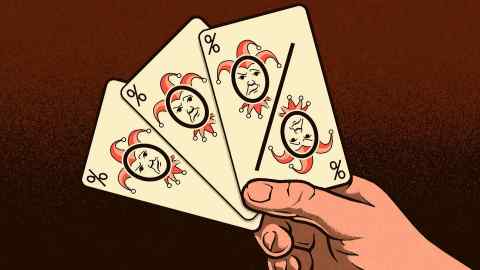 Not all consumers have been affected equally, however. Morning Consult’s polling shows that baby boomers, who tend to allocate more of their budgets to essentials, were the most likely age group to trade down in May while lower and middle income shoppers were also more likely to substitute goods than higher-earning Americans.

“What we’re seeing is a bit of a bifurcation,” noted Kohl’s CEO Michelle Gass on a call with analysts last month, adding that the company has seen continued strength in luxury categories even as some shoppers traded down to cheaper products.

Higher prices would force some consumers to cut out purchases altogether, said Gregory Daco, an economist at EY-Parthenon, but in relative terms “the two extremes of the retail sector are likely to outperform the others”.

Discount retailers were likely to benefit from more pervasive inflation, he said, while “the luxury end of the market is more likely to outperform because of the healthier household finances of luxury individuals.”

Joe Feldman, an analyst at Telsey Group, echoed the sentiment. “Discounters are where there’s going to be more strength” in the coming months, he predicted, noting that they typically perform better when consumers’ feel pressure on their wallets.

“The inflationary environment is one that’s going to create much more polarisation in retail,” said Neil Saunders, a retail analyst at GlobalData who sees low-priced chains including Aldi, Dollar General, TJ Maxx and Walmart benefiting from the spending shift.

However, he added: “Overall it’s not a very helpful environment for anyone.”

Jun 21, 2022Leave a Comment on Retailers face shake-up as US consumers trade down to beat rising pricesBlog, Finance