John, a finance worker based in Hong Kong, is not looking forward to moving to Singapore.

The expatriate, who declines to give his real name or further identifying details, says that he and his family live a “very spoiled existence” in the former British territory, which is coming under increasingly strict Chinese rule.

“I’m staring out at the ocean looking at the pool in front of me as we speak. I know we are not going to have that,” John says during a call from his current home, as he frets about the property market heating up across the South China Sea.

“We are going from a house with a pool, a tennis court, a garden, five bedrooms, to somewhere where we are looking at an apartment, basically,” he says.

Yet John feels he has little choice. He is one of many foreign workers who this year have sought to escape Hong Kong’s strict coronavirus pandemic measures. The tough rules have proved to be the final straw for many in the city who had already endured nearly a year of escalating political turbulence before coronavirus arrived in early 2020.

Although these restrictions have been gradually eased in recent weeks, a large number had already made the move. Reports earlier this year of parents being separated from their children in hospital wards brought China’s crackdown particularly close to home, pushing many families to pack their bags.

The most obvious new destination has been Singapore, another Asian finance hub where, in contrast to Hong Kong, business travellers no longer need to quarantine on arrival. Long seen by some as the Chinese city’s smaller and less lively cousin, its appeal was boosted after it started to lift Covid-19 restrictions last autumn. Curbs on holiday travel, restaurants and nightlife have all been dropped sooner than in Hong Kong.

Relocating has not been simple, however. Besides the normal troubles associated with moving, expats have had to contend with rising house prices, unprecedented competition for school places and increasingly stringent visa requirements.

In March, the Financial Times reported that some of Singapore’s top private schools were receiving up to 15 applications for every one place, as parents fleeing Hong Kong battled to secure a spot. Craig Considine, chief executive of one of the city-state’s most popular international schools, Tanglin Trust School, says demand has remained “very strong” throughout the year. With places so oversubscribed, he adds, new offers will not be made until the end of 2022.

Estate agents are also being bombarded with calls. In the first quarter of this year, an index of private home rents rose 4.2 per cent over the previous period, reaching the highest level since records began, according to Singapore’s government. The authorities provided only an index, rather than raw rent figures. Private home rents in Hong Kong, meanwhile, dropped almost 2 per cent in the first quarter.

Have you relocated from Hong Kong to Singapore?

What did you find were the biggest challenges? Share your experiences in the comments below

Most of the residential towers that trace the Singapore skyline are public housing, with about 80 per cent of residents living in these apartment blocks, leaving new arrivals racing to snap up the much smaller selection of private properties.

“If you wanted a [house] along Bukit Timah near the British school, you’re screwed,” he told the FT earlier this year, referring to a sought-after residential area near downtown Singapore with one of the city’s densest concentrations of private housing.

Leonard Tay, head of research at estate agent Knight Frank’s Singapore office, expects rents to continue rising for up to 15 months. It is “not just the guys from Hong Kong” heating up the market, he adds, pointing to a shortage of housing supply after construction was disrupted during the pandemic.

As well as Bukit Timah, Tay says the areas around the Orchard Road shopping district and near the beach in East Coast Park have seen particularly high demand.

Relocation headaches have been made more painful by recent government measures to stem the influx of foreign workers. Singapore, typically seen as one of the world’s most open economies, has long welcomed international corporations. But competition for jobs has hardened attitudes against the high-earning migrants who frequent the central business district and pricey bars along nearby Clarke Quay. The government has felt under pressure to respond. 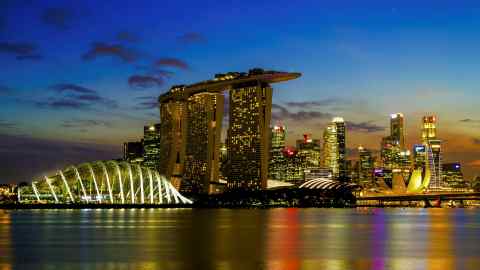 Officials have raised the base pay required for visas on three occasions in as many years, with a new minimum salary of about $44,000 for professionals coming into force this autumn. For people in their mid-40s, that rises to more than $91,000. With companies saying they are under pressure to favour locals, not every family who might have expected to make the trip has been able to do so.

“[The government] has been very explicit they don’t want us to move more back-office people,” said the Asia head of one international bank last month. “They’re happy for us to have a bigger back-office operation as long as we hire locally.”

Daniel Beatty, who relocated from Hong Kong in September, says his wife has struggled to get a job amid the pushback against foreigners.

It really does seem that Singapore is now a better place to start a business than Hong Kong. And it is an hour and a half to Bali. It’s great

But the business executive himself is reluctant to hire other expats. “I’m looking at the school fees, the rental costs,” he says. “People will be demanding more pay to move here. I’m very reticent to bring even more people to Singapore.”

Westerners have been making the journey to the island cities of Hong Kong and Singapore — separated by a roughly four-hour flight — since as long ago as the 19th century, when both were British colonies. In more recent decades, foreigners in search of fortunes and warmer climes continued to travel to and from the cities’ financial districts where, instead of colonial buildings, glass offices occupied by the world’s largest banks now stand.

But, despite the two cities’ connections, those recently arriving in Singapore have found living there to be a very different experience.

The tiny city-state secured independence from British rule in 1959, decades before Hong Kong was handed over to China. Under the uncompromising guidance of its first prime minister, Lee Kuan Yew, it transformed in a matter of years from a trading outpost with scarce natural resources to a low-tax business centre.

Rainforests were razed, as were many of the city’s traditional shophouses — low-rise buildings incorporating residential and commercial spaces. Land was reclaimed from the sea to build more sleek, perpendicular towers. High state funding for housing and healthcare appeased voters, while political dissent was often swiftly stamped out.

These clampdowns have continued to the present day. In 2020, Singapore charged an activist who stood alone and held up a cardboard sign bearing a drawing of a smiley face with participating in an “illegal public assembly”.

Foreigners who avoid such demonstrations often find Singapore to be comfortable, clean and safe, while somewhat lacking the spirit suggested by its moniker, the Lion City. But after witnessing violent street protests and increasing political change in Hong Kong, some are grateful for the predictability of life in Singapore.

“Everyone goes: ‘Hong Kong, Singapore: same, same’. But actually it is not, it is really different,” says Heather Thomas, an American business owner who recently moved from Hong Kong. “The pace of life is a little slower, which is not a bad thing necessarily.”

Another entrepreneur who arrived this year says that Singaporeans are “still very cautious” about coronavirus restrictions, despite the relaxation of the rules. Like others, he was loath to speak publicly about his new home.

“In Hong Kong it is immediate,” he says of how Hong Kongers responded when coronavirus restrictions were temporarily lifted in previous years. “You open the gyms; the gyms are full.”

The adjustment to Singapore is also physical. About 2,500km south of Hong Kong, it sits just one degree north of the equator.

“It is brutal,” says the entrepreneur. “[During my first month] here I could not get enough sleep. I was always worn out from the humidity.” He adds: “You order a whisky sour and the ice cube melts in 30 seconds.”

The humidity is brutal. You order a whisky sour and the ice cube melts in 30 seconds

After adapting to their more humid and docile new city, many professionals are nevertheless hopeful about their future in Singapore. Thomas, who has run a Pilates exercise business in Hong Kong for 17 years, was already considering an expansion to the city-state before the pandemic struck. The struggles her business faced subsequently pushed her to accelerate those plans and start a new life in Singapore.

“We need to diversify . . . We have been suffering on and off with closures for the last three years,” she says. “[In Singapore], there is a place for classical Pilates and there is an increasingly sophisticated clientele. There is demand [in a space] that has not been occupied yet.”

With more people like her landing in Singapore, its prospects as a hub for small businesses may be rising.

“It really does seem that [Singapore is now a better place to start a business than Hong Kong],” she says. “And it is an hour and a half to Bali. It’s great.”

Until he relocated temporarily to Singapore at the start of this year, Covid-19 had loomed large over Phil Krichilsky, who runs a consultancy for businesses in Asia. When word first began to spread of the virus in 2019, he says he was working for a manufacturing client just a two-hour journey away from Wuhan, the Chinese city where the virus was first detected. From his home in Hong Kong, he has spent much of his time since then navigating Beijing’s unpredictable pandemic policies.

Now, like many who arrived in Singapore this year, he feels liberated simply because he is able to travel freely across the border. “When I was a kid, there was a game called whack-a-mole,” he says. “You knew what was going to come up [but] you didn’t know when . . . The inconsistency [in Hong Kong] makes it next to impossible for business executives to work in the mainland or the rest of the world.” Arriving in Singapore, by contrast, he was “immediately” awed to discover that clearing customs and leaving the airport took only 20 minutes.

“I went out for a walk [and restaurants were inviting me in],” he recalls. “I thought I was going to have a heart attack, man. I thought it was so cool.”