Two of Mike Pence’s past advisers will testify on Thursday that the former US vice-president came under significant pressure to overturn the 2020 election results in favour of his boss Donald Trump.

Greg Jacob and Michael Luttig, who gave legal advice to Pence while in office, will appear in front of the congressional committee investigating last year’s attack on the US Capitol in the third in a series of public sessions.

Committee officials said the hearing would focus on how former president Trump and his allies allegedly put pressure on Pence to reject the election results from certain states where his opponent Joe Biden had won. They also suggested they would show that such behaviour could classify as a criminal offence.

One committee aide said: “We’re going to focus on the pressure campaign on former vice-president Pence, driven by the former president, even as advice was swirling around the White House, saying that the scheme was illegal.”

They added: “We’re going to show that that pressure campaign directly contributed to the attack on the Capitol, and that it put the vice-president’s life in danger.”

The hearing on Thursday, scheduled for 1pm EST, will be the third in a week, as members of the bipartisan panel lay out their findings to voters for the first time.

The second session focused on election night itself, and how Trump insisted the vote had been rigged despite the advice of many of his inner circle.

Thursday’s hearing will focus instead on the way in which John Eastman, one of Trump’s lawyers, allegedly argued that Pence should not formally certify Biden’s electoral victory during a Senate session on January 6. It was that session that protesters were trying to interrupt when they stormed the building in what became a riot.

Committee officials said they would show that Eastman’s legal argument was wrong, and that Trump’s repeated promotion of it helped lead to the violence on that day. They also suggested this could even lead to charges against Eastman.

In a video preview of the hearing, a clip shows former White House lawyer Eric Herschmann recalling telling Eastman the day after January 6: “Get a great effing criminal defence lawyer, you’re going to need it.” 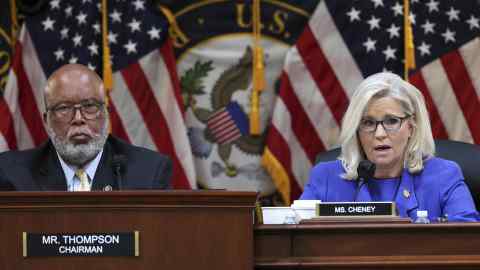 Meanwhile the committee continues to battle with Barry Loudermilk, the Republican representative from Georgia, over whether he should testify in front of the committee.

Bennie Thompson, the Democratic chair of the committee, wrote to Loudermilk on Thursday urging him to provide information about a tour of Congress he appeared to give the day before the riot to someone who they believe went on to take part in the march.

Some of those investigating the violence have previously questioned how protesters seemed to have such a good knowledge of where to find unmarked offices in the labyrinthine building.

Loudermilk responded on Twitter, writing: “Nothing about this visit with constituents [on January 5] was suspicious.” He did not say whether he would testify in front of the committee, however.

Jun 16, 2022Leave a Comment on Third January 6 hearing to examine pressure on Pence to overturn US electionBlog, Finance