Thousands to rally against gun violence in Washington, across U.S. By Reuters

ecomHatch > Blog > Thousands to rally against gun violence in Washington, across U.S. By Reuters 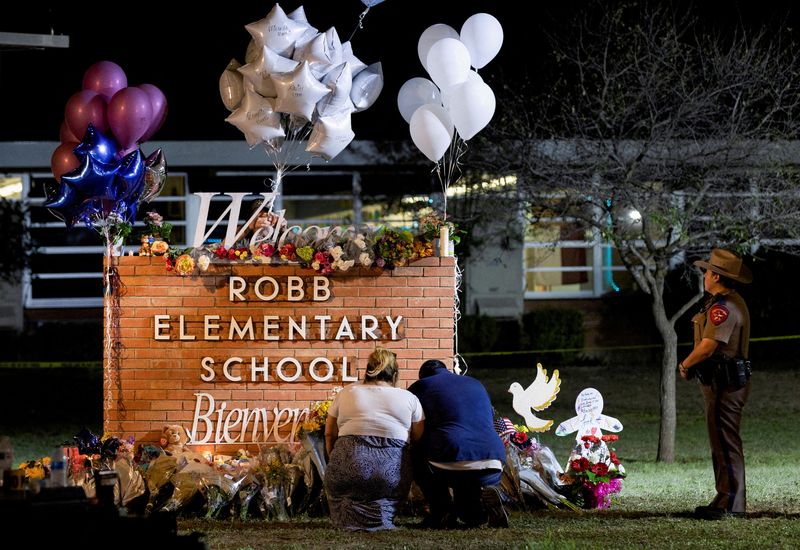 © Reuters. FILE PHOTO: Stephanie and Michael Chavez of San Antonio pay their respects at a makeshift memorial outside Robb Elementary School, the site of a mass shooting, in Uvalde, Texas, U.S., May 25, 2022. REUTERS/Nuri Vallbona//File Photo

(Reuters) – Tens of thousands of demonstrators are expected to rally in Washington, D.C., and across the country on Saturday, calling on lawmakers to pass legislation aimed at curbing gun violence following last month’s massacre at a Texas elementary school.

March for Our Lives (MFOL), the gun safety group founded by student survivors of the 2018 massacre at a Parkland, Florida, high school, said it has planned more than 450 rallies for Saturday, including events in New York, Los Angeles and Chicago.

The organization’s 2018 march on Washington, weeks after 17 people were killed at Marjory Stoneman Douglas High School in Parkland, brought hundreds of thousands of people to the nation’s capital to pressure Congress to take legislative action, though Republican opposition has prevented any new limits on guns from passing the U.S. Senate.

This year’s event in Washington has a simple message to political leaders, according to organizers: Your inaction is killing Americans.

“We will no longer allow you to sit back while people continue to die,” Trevon Bosley, an MFOL board member, said in an emailed statement.

A gunman in Uvalde, Texas, killed 19 children and two teachers on May 24, 10 days after another gunman murdered 10 Black people in a Buffalo, New York, grocery store in a racist attack.

The latest mass shootings have added new urgency to the country’s ongoing debate over gun violence, though the prospects for federal legislation remain uncertain.

Among other policies, MFOL has called for an assault weapons ban, universal background checks for those trying to purchase guns and a national licensing system, which would register gun owners.

In recent weeks, a bipartisan group of Senate negotiators have vowed to hammer out a deal, though they have yet to reach an agreement. Their effort is focused on relatively modest changes, such as incentivizing states to pass “red flag” laws that allow authorities to keep guns from individuals deemed a danger to others.

The Democratic-controlled U.S. House of Representatives on Wednesday passed a sweeping set of gun safety measures, but the legislation has no chance of advancing in the Senate, where Republicans have opposed gun limits as infringing upon the U.S. Constitution’s Second Amendment right to bear arms.

Speakers at the Washington rally include David Hogg and X Gonzalez, Parkland survivors and co-founders of MFOL; Becky Pringle and Randi Weingarten (NYSE:), the presidents of the two largest U.S. teachers unions; and Yolanda King, the granddaughter of civil rights leader Martin Luther King, Jr. Members of MFOL have spent the week meeting with lawmakers in Washington to discuss gun violence.

Jun 11, 2022Leave a Comment on Thousands to rally against gun violence in Washington, across U.S. By ReutersBlog, Finance