Just a few hours after landing in Athens, we slipped out of our hotel and up the marbled road leading towards the setting sun. We were on the Dionysiou Areopagitou, a street named after the city’s first convert to Christianity in 50AD, and heading back to even earlier times. A handful of Athenians walked animatedly past. Two dogs played in the last of that day’s early summer heat. To our right, the escarpment of the Acropolis, the centrepiece of sprawling Athens, loomed ever closer.

Perching on a slab of ancient masonry, we peered into the restored grandeur of the Roman amphitheatre, the Odeon of Herodes Atticus. We paused to sniff the newly bloomed poppies and daisies and savour the dry Attic breeze. We were in the heart of a lively modern city. Yet we were on the fringes of one of the world’s greatest historical, artistic and religious sites — and we had it almost to ourselves.

Round a corner, up a dozen crude stone steps, and we were at the Parthenon’s gates. Young men were playing instruments and singing. An artist was sketching the pastel hues of the city below. The tableau could almost have been from any time in the past 2,500 years. We walked on, round the Acropolis, ducking through the candle-lit tavernas of Plaka, the old town.

Then, just shy of our hotel, we stopped again. Before us was a monumental gateway: Hadrian’s Arch. On the side facing the Acropolis, a simple inscription reads: “This is Athens, the ancient city of Theseus.” On the other side, facing away, towards the then new Roman city, are the words: “This is the city of Hadrian, and not of Theseus.”

Hypnotically, we were led through the centuries as rulers and religions waxed and waned, Christian and then Muslim — while the Parthenon pretty much endured

This stern message echoes down the centuries. As we stood there, 1,000 miles to the northeast of us, the continent’s latest invading imperial army was on the march, and towns captured by the Russians in southern Ukraine were submitting to victors’ inscriptions and historical claims.

A few hundred yards on, we found ourselves outside AthensWas, our boutique hotel. Within minutes, we were being ushered to a table at its rooftop restaurant. Gazing out over the Acropolis, we awaited the famed fusion fare of Alexandros Charalambopoulos, one of the city’s most celebrated chefs. Such is Athens: ancient and modern barely a moment from each other, lightly intertwined.

I had last been to Athens six years ago with a teenage son. We had immersed ourselves in its history over five archaeology-rich days. But this time had to be different. It was a weekend break, however heretical this may sound to classicists. My wife had last been to Athens in the 1980s as a child. So after all those years, the Parthenon had to have top billing. Yet we had just three days — and contemporary, spruced-up Athens was also in our sights.

Our plan was simple — day one: the ancient world; day two: the modern; day three: a blend of both. Our first morning, after a blissful breakfast on our hotel rooftop, we wandered back up to the Parthenon. Nikolaos Tsoniotis, our guide, was a distinguished archaeologist from the Ministry of Culture. For two hours he worked his magic, bringing life to the ruins and restorations of the Periclean dream. On all sides, archaeologists were tapping away with their hammers. It is, as our guide explained, very much a living site.

We gazed over the port of Piraeus in the direction of Salamis and imagined the epic sight beheld by the Persians from the Acropolis at the time of the great sea battle in 480BC — which was to cut short their dreams of a long occupation. Then, via the pillars and carvings, we were hypnotically led through the centuries as rulers and religions waxed and waned, Christian and then Muslim, while the Parthenon pretty much endured. We imagined its first restorers, in the mid-1830s, hard at work just after Greek independence, and of course two decades after Lord Elgin’s men removed swaths of the Parthenon’s frieze.

Diplomatically, our guide let the stones tell their own story. Just down the hill, however, Nikolaos Stampolidis, the impassioned director-general of the Acropolis Museum and one of Greece’s most renowned archaeologists, did not hold back. After endless ebb and flow over the years, the argument over whether the “Elgin Marbles” should be returned from the British Museum — which bought them from Elgin — is bubbling once more and seemingly tilting in the Greeks’ favour.

The Acropolis Museum was built in the 1990s to counter the argument that the city’s dire pollution meant the sculptures would deteriorate if reinstated on the Parthenon. It is stunning. Stampolidis gave us a whirlwind tour. Describing the frieze as “the most perfect thing ever done by human hands”, he pointed to the facsimile of the originals — which are still in London — saying, “How can we accept this?”

“The British side was saying, ‘Where will you put them?’ Now the arguments have changed and they have decided to call the British Museum an encyclopedic museum.” Stampolidis is enthused by the recent agreement by Italy to give back “forever” a fragment from the Parthenon’s eastern frieze, showing the foot of the goddess Artemis. This he sees as a template for a possible return of the Parthenon sculptures.

The British Museum has long argued that as a museum of the world, it is the ideal home for the Marbles — but the pressure on it is intensifying against the backdrop of a growing global clamour for restitution of artworks to their countries of origin. In late May, the British actor and writer Stephen Fry said he had a “passion” for returning them and predicted they would be welcomed by two million people in the streets of Athens.

We raced across the city for a tour of the National Gallery, reopened last year after an eight-year renovation project, in time for the 200th anniversary of Greek independence. It’s a stylish modern building whose most memorable works are of the independence struggle. As we headed in search of dinner in Plaka, I was in no doubt that Stampolidis’s conviction and certainty — and the confident redesigned gallery — somehow reflected a city that seems to have recovered its mojo after the upheaval of the sovereign debt crisis just over a decade ago.

The next day, we were up early and striding through the heart of Athens. It was the annual Open House day, when some of the city’s most famous and varied architectural landmarks are open to visitors. In the space of a few hours, we were whisked from building to building by a range of sparky 20-something Athenians, whose enthusiasm for their country’s and Europe’s future was captivating.

Out of season, Hydra is still a place of poetry and dreams — even if in high summer it is more of a chichi resort than it was in Leonard Cohen’s heyday

My highlight was a special tour of the exquisite mansion that is the Loverdos Museum. Built by German architect Ernst Ziller in the 1880s, it was then owned by financier and collector Dionysios Loverdos, and opened to the public as a museum last year. It houses a range of post-Byzantine icons and pictures in a series of stunning rooms, with cupolas, mosaics, murals, ceiling paintings, altars and more.

After a morning immersed in relatively modern architecture, including the National Theatre, we sat in the late afternoon sun, reading and watching Athens go by. Dinner was very much in the 21st century at the somewhat improbably named Cherchez la Femme, just down from bustling Syntagma Square in the city centre. Specialising in the Greek equivalent of tapas, it is one of Athens’ many lively new restaurants, as recommended by our polymathic contributor Fani Papageorgiou. It was just what was needed: the heart of Athens is small and walkable — and walked we had!

Just after dawn on our third day, on a whim, we took a taxi down to Piraeus and hopped on a ferry to the island of Hydra. A brisk two hours skimming across the Saronic Gulf, and we were in the spiritual home of Leonard Cohen and his fans. It is easy to see how he just stayed off and on for years with his girlfriend and muse Marianne Ihlen, writing many of his most legendary lyrics and songs.

Far-sighted Hydrans successfully petitioned the authorities long ago to ban cars. In the pre-season months it is still a place of poetry and dreams — even if in high summer it has become something of a chichi resort in the years since Cohen’s 1960s Bohemian heyday. By chance, the FT’s former Arts editor Peter Aspden was there. He met us at the quay and whisked us up the coast to his favourite beach. We had come ill-equipped, without swimmers or towels, but who could resist the crisp blue waters at a relatively early stage of the season? 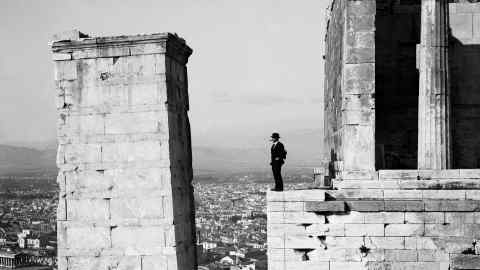 After a bracing swim and a long warming-up conversation in the sun on restitution, the Parthenon and much more, we found ourselves walking round the next headland for lunch. We found a dreamy family restaurant looking out over the mainland. A lazy meal of snapper and prawns later, and it was time to lollop down the hill for our early evening ferry back to Athens, sated on seafood and sun.

The following morning we were circling over southern Greece bound for London. Three thousand-odd years of history in three days . . .

Alec Russell is the editor of FT Weekend

For more on visiting Athens, see discovergreece.com.
Alec Russell was a guest of AthensWas (athenswas.gr; double rooms from €242 per night) and Aegean Airlines (aegeanair.com).
Entry to the Acropolis Museum (theacropolismuseum.gr) costs €10; entry to the Loverdos Museum (loverdosmuseum-bma.gr) is free.
Cherchez la Femme (cherchezlafemme.gr) is at Mitropoleos 46