Turkish companies could be forced to start selling their foreign currency holdings after a new directive was issued that bankers and analysts described as a fresh step down the path towards capital controls.

The Turkish banking regulator announced on Friday night that banks would be banned from extending new local-currency loans to groups with significant dollar and euro holdings.

The measure will apply to companies with foreign exchange on their books worth more than TL15mn ($890,000) that exceeds 10 per cent of their total assets or annual revenues, said the Banking Regulation and Supervision Agency.

The move sent shockwaves through the Turkish banking sector. “If their lira loan matures Monday, they cannot borrow,” said one Istanbul banker, who asked not to be named. “No bank can extend a [lira-denominated] loan.”

Güldem Atabay, an economist who writes for the website Para Analiz, described the measure as a “hardening of capital controls”, adding that certain companies would be “forced to sell foreign currency”.

The move is the latest in a string of unorthodox attempts to support the ailing lira without raising interest rates. The currency gained as much as 5 per cent against the dollar at one point following the announcement — a jump that took place in thin trading volumes after Turkish markets closed.

Analysts warned that the move risked backfiring. “I think it will actually add to people’s fears about further such measures, and fuel capital outflows,” said one London-based analyst.

Business bodies and bankers described the threshold as “very low”, but warned it could hit medium-sized businesses as well as large concerns.

Turkey, which has suffered from a succession of currency crises in recent years, has once again been grappling with a weak lira in recent weeks as President Recep Tayyip Erdoğan has refused to allow interest rate rises despite soaring inflation.

The central bank on Thursday kept its benchmark lending rate on hold at 14 per cent even though the consumer price index reached a 20-year high of more than 73 per cent in May. 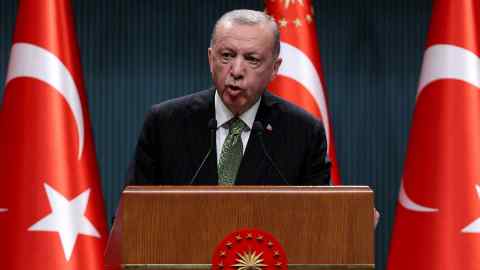 Erdoğan — who rejects the accepted economic wisdom that higher borrowing costs help to curb inflation — vowed earlier this month that, rather than raising interest rates, he would continue to lower them.

Hamstrung by the president’s unconventional views on economics, Turkish authorities have adopted a series of interventionist measures aimed at bolstering the currency without raising rates.

In April, the government announced that exporters would be forced to convert 40 per cent of their foreign currency revenues into lira. The central bank has sold billions of dollars in recent months in a bid to prop up the currency, and has put pressure on banks not to allow Turkish corporates to buy large sums of foreign currency.

Analysts say that Turkey, which has a large trade deficit and low foreign currency reserves, is in danger of facing another full-blown currency crisis in the months ahead.

Jason Tuvey, a senior emerging markets economist at consultancy Capital Economics, wrote in a note to clients this week that “disorderly falls in the lira are a major risk”. The most likely response, he said, would be “a further lurch towards capital controls and measures to boost lira-isation in the banking sector”.