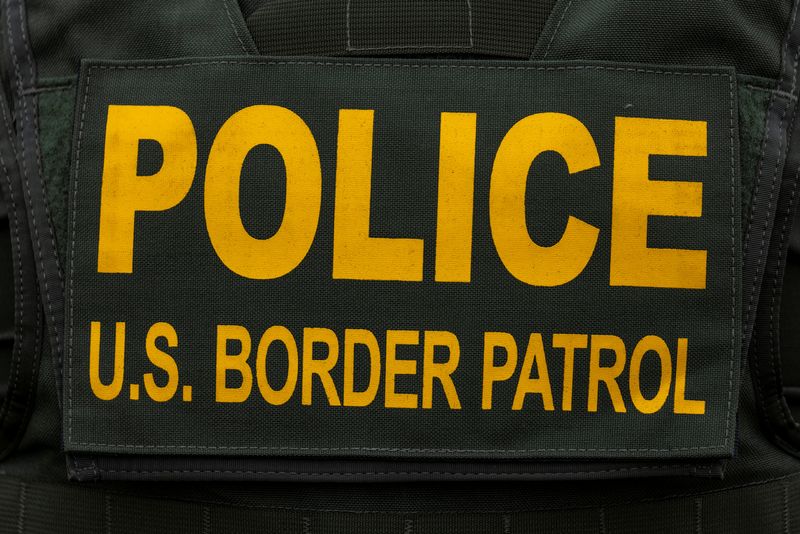 © Reuters. FILE PHOTO: The vest logo is shown on a federal agent as the U.S. Border Patrol announce the formation of a new Marine Unit in San Diego, California, U.S., June 22, 2021. REUTERS/Mike Blake

(Reuters) – A U.S. federal judge on Friday threw out a Biden administration directive narrowing who can be targeted by immigration agents for arrest and deportation, siding with officials in Texas and Louisiana challenging the policy in court.

The directive, finalized in a memorandum issued last September by the Department of Homeland Security (DHS), instructed agents to focus on immigrants deemed to pose a threat to national security or public safety, as well as on recent border crossers.

The policy gave immigration and border agents discretion to spare migrants who have lived in the United States a long time, are elderly, or are minors or whose family members might be adversely affected by deportation. Other mitigating factors to be considered included service in the military or an immediate family member victimized by crime.

The directive was part of a shift in U.S. immigration enforcement priorities undertaken by the administration of President Joe Biden, a Democrat, to reverse the hardline deportation polices of his Republican predecessor, Donald Trump.

But in the latest of several court decisions siding against Biden, U.S. District Judge Drew Tipton in Corpus Christi, Texas, a Trump appointee, vacated the enforcement memo as “arbitrary and capricious,” and a violation of the Administrative Procedures Act.

In his 96-page opinion, Tipton held that Texas and Louisiana had largely proven their case against Biden’s new enforcement policy. Tipton previously blocked a 100-day moratorium that DHS placed on most deportations on Biden’s first day in office.

An earlier, more rigid version the DHS enforcement memo, which required immigration agents to obtain advance approval from a senior manager before arresting someone who did not meet specific criteria for detention, was likewise blocked by a federal court.

The terms of both DHS memos differed dramatically from the Trump administration’s policy. Under Trump, Immigration and Customs Enforcement (ICE (NYSE:)) agents were free to pursue low-level offenders and non-criminals, as well as people with long ties to the United States.

The Biden administration’s more lenient approach appeared to make a big difference on the ground. Arrests and deportations of immigrants living illegally in the United States plummeted in 2021 compared with 2020, while more of those arrested were convicted of serious crimes, according to ICE data released in March.