British unions have warned transport secretary Grant Shapps that his plan to legislate to allow agency workers to provide cover for striking rail workers was impractical and would be fiercely resisted.

In a sign of growing tensions ahead of a series of planned strikes this month over wage levels, Shapps said rail workers were already well paid, claiming the industrial action was being driven by “Marxists”.

Downing Street is braced for strikes across a range of sectors as unions fight for pay deals that keep pace with prices. Prime Minister Boris Johnson fears this will lead to a spiral of higher wages pushing inflation even higher.

The first large disruption is scheduled for later this month, with unions threatening to bring rail services to a halt on three separate days in a dispute over pay and proposed job losses.

Shapps said he was drawing up legislation to remove a legal restriction introduced by Tony Blair’s Labour government to stop employers hiring agency staff to carry out the duties of striking workers.

Although the move would not affect strikes this month, Shapps told the Sunday Telegraph it could take effect “during this particular dispute”, if strikes continued. He said union leaders were in some cases “Marxists”.

The transport secretary is also considering legislation, promised in the 2019 Conservative party manifesto, requiring a minimum standard of service to be guaranteed on the railways during strikes, but this is unlikely to be enacted in the short term.

Mick Lynch, general secretary of the RMT union, said that repealing the law on agency staff filling in for striking workers would only harden its members’ resolve to continue with the planned industrial action.

“We already have the most restrictive anti-democratic trade union laws in western Europe and if the government attempts to reduce our rights further, the RMT along with the rest of the trade union movement will mount the fiercest resistance possible,” he said in a statement.

The RMT is planning the worst disruption on the railway network in 30 years with 40,000 union members at infrastructure owner Network Rail and 13 train operating companies expected to walk out on June 21, 23 and 25. There is also likely to be severe disruption on June 22 and 24 because trains will not be in the right places. 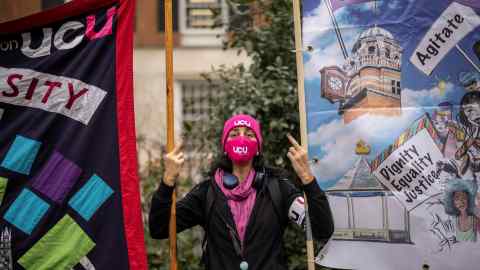 The proposed strike comes against a backdrop of the rising cost of living and increasing industrial unrest across key parts of the UK’s infrastructure and public services.

Pay disputes at the Royal Mail, British Airways and BT Group are also heading towards ballots on strike action, and unions representing teachers and civil servants are gearing up to hold votes on whether to protest.

Simon Weller, assistant general secretary at Aslef, the British train drivers’ union, said Shapps’s proposal would not work as agency staff lacked the skills and qualifications to fill in for drivers, signallers and controllers.

“These are all highly skilled jobs that aren’t run by agencies,” he told BBC Radio 4. “There is not a pool of agency train drivers out there.”

Labour politicians are also being put on the back foot by the proposed rail strikes, as they are constantly pressed in media interviews to condemn action that will disrupt work, schools and holidays.

Rachel Reeves, shadow chancellor, urged both sides to step up talks to find a compromise solution, claiming that ministers needed to act like “firefighters rather than arsonists”.

Jun 12, 2022Leave a Comment on UK unions warn minister over plan to use agency workers during rail strikeBlog, Finance