Ukraine wants Nato to recognise its central role in European security when leaders of the alliance meet in Madrid to overhaul its strategy, a senior Kyiv official told the Financial Times.

Ihor Zhovkva, diplomatic adviser to Ukraine’s president Volodymyr Zelenskyy, said a new version of Nato’s guiding document known as the strategic concept should acknowledge his country as a “cornerstone” of security arrangements on the continent given its fight against Russian aggression.

“We would like to have the understanding that Ukraine is a cornerstone of European security,” said Zhovkva, who is also deputy head of the presidential administration.

Ukraine is not participating formally in discussions on Nato’s strategic concept but has sent its proposals to allies in the alliance.

“If the Nato members will not reveal the real situation of what is going on in Europe, in Ukraine, then this document will be another document, absolutely irrelevant,” Zhovkva added.

Nato’s current strategic concept, which outlines the alliance’s mission and security tasks, was last updated in 2010. Among an array of goals aimed at promoting European security, it commits Nato to continuing to develop its partnership with Ukraine, citing the alliance’s decision at the 2008 Bucharest summit to welcome Kyiv’s aspirations for membership.

While Ukraine recognises that membership of Nato is not feasible in the short term, it wants the alliance to reaffirm the partnership.

“Nato members have declined our aspirations. We will not do anything else in this regard,” Zhovkva said. 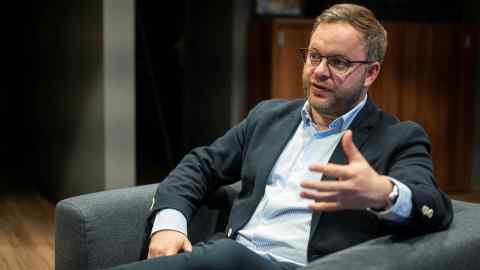 Ukraine also wants to see any mentions of Russia as a partner removed from the strategic concept. The last version says Nato seeks “a true strategic partnership” with Russia and sees Nato-Russia co-operation as being of strategic importance.

“We expect in the Nato strategic concept . . . there will be more strict and severe warnings to the Russian aggressor. Don’t be shy, that’s my appeal to Nato members, in formulating the provisions vis-à-vis Russia,” Zhovkva said.

Zhovkva expected the references to Russia to be removed, but said some countries wanted to leave a path for dialogue. He said it was important the war in Ukraine be described in the documents. “It’s not enough just to cross out the word ‘partner’,” he said.

Zelenskyy will address the G7 summit in southern Germany and then the Nato meeting in Spain next week via video link. Zhovkva said the president would restate his demand for treaty-based security guarantees from G7 members for Ukraine for when the war is over.

“We need to have a system of security guarantees for my country,” Zhovkva said. “When the next time aggression will happen or [Russia] will be thinking about aggression again, they and we should understand how the system works.”

He said Zelenskyy’s chief of staff was negotiating such guarantees with the national security advisers of the US, UK, Germany and France. Western diplomats have said such conversations have not gone far and that details of how they would work remain unclear. Diplomats expect the discussions at the G7 in Elmau, Bavaria, starting on Sunday to focus on sanctions.

Ukraine also wants the G7 countries to toughen up economic measures against Russia. Zhovkva credited the US and UK for moving quickly with sanctions but urged the EU to move faster to a seventh package of restrictions.

“We saw how difficult it was with the European Union about the sixth package of sanctions, but we want the next package,” he said. “We expect there will also be heavy disputes around the issues in this package, definitely the embargo for gas for instance.”