Democratic and Republican lawmakers will next week introduce legislation to spur the White House to funnel more money to the Indo-Pacific region to help counter China.

Ami Bera, the Democratic chair of the House foreign affairs Asia subcommittee, and Steve Chabot, the top Republican on the panel, hope their “Indo-Pacific Engagement Act” will narrow the gap between the rhetoric about Asia being the priority region and funding levels.

President Joe Biden came to office pledging that he would focus his foreign policy on China. But some experts worry that the US is still not matching its words with resources — a concern over multiple administrations that has been amplified this year as the US has given Ukraine billions of dollars.

“Going back to the Obama administration, we’ve been trying to do this pivot to the Indo-Pacific. We’re getting there, but we’re getting there awfully slowly,” Bera told the Financial Times. “We want to make sure we’re not losing focus on the strategic competition of the 21st century — competition with China.” 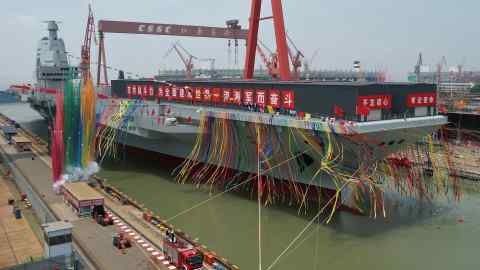 The bill will require the state department’s East Asian and Pacific Affairs bureau — in co-ordination with the South and Central Asian Affairs bureau and the Asia bureau at the US Agency for International Development — to submit a report to Congress each year outlining the resources needed to meet the goals in the US Indo-Pacific strategy and upcoming National Security Strategy. It is designed to give Asia officials a louder voice in the debate about the appropriate level of funding for each geographic region.

“If we truly believe China is the priority and the Indo-Pacific is where the future of the 21st century will be written, we need to match our rhetoric with our budgets. It’s that simple,” said Chabot, who added that it was “unconscionable” that administration foreign aid and diplomacy budgets routinely treat Asia as “one of the least important” regions.

The proportion of the foreign operations budget allocated to the East Asia bureau, for example, has hovered between 3 and 5 per cent over the past decade, according to the Congressional Research Service. By comparison, budgets for Europe and Eurasia have risen 65 per cent over that period.

The bill echoes the Pacific Deterrence Initiative, which was passed in 2020 to give the head of US Indo-Pacific Command, who oversees American military forces in Asia, a bigger say in the Pentagon budget process.

Eric Sayers, an Asia expert at the American Enterprise Institute, said PDI had started a “healthy debate” about defence priorities but the US had to bolster its diplomacy and security assistance. “Too often we have allowed other priorities in Europe or the Middle East to take precedence. This Asia-second default tendency needs to give way to a new framework for a comprehensive strategy to resource the Indo-Pacific as the priority theatre.”

Kurt Campbell, the top White House Indo-Pacific official, this week conceded that it was a “valid criticism” to say that the US had not matched its rhetoric with dollars. He said the Biden administration was moving in the right direction, and cited examples including a move to open more embassies in the Pacific and money to finance coastguard initiatives.

“We’ve been to this rodeo before. We understand how things can be diverted,” Campbell said at an event at CNAS, a think-tank. “We’ll have to make the argument that . . . the lion’s share of the history is going to be playing out in the Indo-Pacific, and we have to really take the necessary budgetary steps to reflect that in our activities.”

The White House in May said it would invest $150mn in south-east Asia to fund areas such as climate change to infrastructure. Critics said the sum was relatively small compared to the funds China ploughs into the region. At the CNAS event, US national security adviser Jake Sullivan dismissed the idea that the US was not doing enough.

“We’re really trying to stimulate a long-term economic relationship rooted in private sector investment, not in massive cash transfers from the American Treasury to these countries. And that means taking relatively smaller amounts of money and leveraging significant private sector investment to add up to billions and ultimately tens of billions of dollars,” Sullivan said.

Charles Edel, an Indo-Pacific expert at CSIS, a think-tank, said the new bill would help address the fact that America US “has chronically under-resourced our diplomacy in the Indo-Pacific region while Beijing has poured time, money and attention into its efforts over the past decade”.

Lisa Curtis, an Indo-Pacific expert at CNAS, said the US was starting to make a shift towards prioritising the Indo-Pacific in terms of military, economic, and diplomatic budgets, but said it also needed to be smart in its approach. “When it comes to things like increasing financing for infrastructure needs in the region, the US will never match China dollar for dollar, but the US can leverage its private sector and offer things like technical assistance and training which countries in the region value.”

One state department official welcomed the push for more Indo-Pacific resources and the bipartisan congressional interest. But she said that unless lawmakers approved a bigger overall budget, the effort to focus on the Indo-Pacific in the legislation risked ending up more just an exercise.

But Bera stressed that the bill would intensify the focus on the need to combat China. “If we can shine a spotlight on this and keep sustained pressure and focus on the Indo-Pacific, that will signal to the administration the urgency Congress sees.”

Jun 19, 2022Leave a Comment on US lawmakers push for more money to counter China in Indo-PacificBlog, Finance