Gun manufacturers are broadly shielded from federal lawsuits brought against them in the US over the use of their products. But as mass shootings proliferate, New York is trying to find a way around that.

The state passed a “nuisance statute” last year that allows civil lawsuits against gun companies for improper marketing or sales. It now has its first test case, in a lawsuit filed against Glock by a women shot on the New York City subway in April. It manufactured the pistol used in the attack.

Attorney Mark Shirian brought the case over Glock’s marketing and distribution on behalf of Ilene Steur, who was injured in the Brooklyn attack. “They knew exactly what they were marketing,” Shirian said. “They know that criminals are using them to commit crimes and they stuck their heads in the sand.”

Representatives for Glock did not respond to requests for comment.

“We’re just looking for accountability for this particular product,” Shirian added. “No one is looking to take guns away from people. It’s very reminiscent of tobacco litigation. No one is taking away the right to smoke cigarettes.”

Families of victims killed in a separate mass shooting in Buffalo, New York, last month are also considering suing Remington, the maker of the Bushmaster assault rifle used in the supermarket massacre, according to Kristen Elmore-Garcia, a lawyer for the families of two victims in the city.

The state law is intended to sidestep a federal statute, the Protection of Lawful Commerce in Arms Act, which former president George W Bush signed into law in 2005. That law protects gun companies from harm “caused by the criminal or unlawful misuse of firearm products”, dictating that they cannot be sued in federal or state court.

New York’s law gets around that federal restriction by specifically allowing lawsuits alleging improper marketing or sales. But similar laws are still few and far between elsewhere in the US. While the California state assembly passed a bill earlier this year that would allow injured parties to sue gunmakers, similar bills did not pass in Maryland and New Jersey, according to Anne Teigen, programme director at the National Conference of State Legislatures.

In Connecticut, families of the victims of the 2012 Sandy Hook Elementary School mass shooting found another way around the federal liability shield in their case against Remington Outdoor, whose assault-style rifle was used to kill 20 children and six adults.

They sued under a general state law prohibiting unfair trade practices. The Connecticut Supreme Court found their case was not blocked by federal law and, after the Supreme Court declined to review that decision, the families and Remington reached a $73mn settlement in February.

While passing any laws to tighten gun control at the federal level has become a near-impossible task, lawmakers in Congress are attempting to enact some modest changes in response to the mass shooting at an elementary school in Uvalde, Texas, in which 19 children and two teachers were killed.

The bipartisan proposal in the Senate includes stricter background checks for gun buyers younger than 21, as well as funding for school safety and mental health. The legislation also contains funding for state grants to pass red flag laws, which would allow for court orders to temporarily seize guns from dangerous individuals.

President Joe Biden had urged Congress to consider restricting assault weapons and expanding background checks more aggressively after the Uvalde shooting, but those measures failed to gain traction in the closely divided Senate. 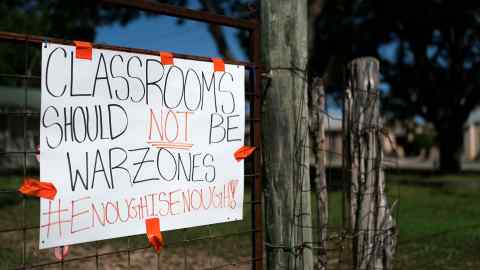 The New York law faces its own challenges. A gun industry group, the National Shooting Sports Foundation, sued to strike down the law. It lost in court, but Mark Oliva, the group’s public affairs director, said it plans to appeal.

“The law is counter to any basic understanding of tort law and the Protection of Lawful Commerce in Arms Act,” he said.

Timothy Lytton, a professor at the Georgia State University College of Law in Atlanta and an expert on health and safety regulations, said that if the appellate court sides with the state of New York, the NSSF can again appeal to the Supreme Court.

“If the Supreme Court decides that [the New York statute] is acceptable, it will blow a large hole in the federal immunity bill,” he said.

Given the conservative balance on justices on the Supreme Court, such an outcome may be unlikely. The high court is separately considering longstanding New York restrictions on carrying handguns.

Jun 23, 2022Leave a Comment on Why New York gun violence victims may have their day in courtBlog, Finance